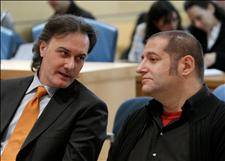 After being sentenced by a High Court judge yesterday to each pay fines of €3,000 for a cartoon lampooning Prince Felipe, whom they showed on the front cover of the 20th July edition having sex with Princess Leitizia in a skit on the government's 'cash-for-babies' scheme, 'El Jueves' illustrators, Guillermo Torres and Manel Fontdevila (photo, left to right), said last night that it had been "€6,000 euros well-spent."

In an interview with Eva Hache on Cuatro's 'Noche Hacha' the convicted cartoonists went on to speculate that the money would be used to "increase the Prince's pay."

In light of the news that the Duke and Duchess of Lugo have separated after thirteen years of married life, the pair were asked if there were any parodies in the pipeline and what legal constraints there might be. "Marichalar and Letizia are not protected, you are only forbidden from making jokes about direct descendants of King Juan Carlos," said Fontevila, who went on to explain that the judge had only convicted them of slandering Prince Felipe.

'El Jueves' cartoonist claims it was 'Tom and Katie'
By: thinkSPAIN
Saturday, July 21, 2007

Guillermo, the artist responsible for the cartoon on the front cover of this week's edition of the satirical magazine 'El Jueves', claims that the couple shown is not in fact Prince Felipe and Princess Letizia, but Tom Cruise and Katie Holmes.

Judge Juan del Olmo ordered the magazine to be withdrawn from sale yesterday, and state prosecutors are demanding that the magazine's website (www.eljueves.es), where the offending cartoon can still be viewed this morning, be closed down.

The front cover cartoon depicts a couple performing the sexual act while the man says "If you get pregnant, this will be the nearest thing to work I've ever done," and is a skit on the government's new "cash for babies" scheme whereby all parents of children born after the 3rd July will be entitled to a state subsidy worth €2,500.

The magazine's director, Albert Monteys, and editor, José Luis Martín, told reporters yesterday that they were "very surprised" by the High Court ruling.

Under Spanish law (Article 490.3 of the Penal Code), the maximum penalty for slandering the royal family is a two year jail term.

High Court judge Juan del Olmo has ordered for all copies of the satirical weekly magazine 'El Jueves' to be removed from sale after an "irreverent" cartoon of Prince Felipe and Princess Letizia appeared on the cover of this week's issue.

The cartoon, which shows the couple performing a sexual act, has Prince Felipe saying "If you get pregnant, this will be the nearest thing to work I've ever done," and is a skit on the government's new "cash for babies" scheme whereby all parents of children born after the 3rd July will be entitled to a state subsidy worth €2,500.

The judge has also ordered for the printing moulds of the cartoon to be seized and for the magazine's director to identify the author, who may be charged with slandering the royal family, an offence which carries a maximum penalty of two years in jail.