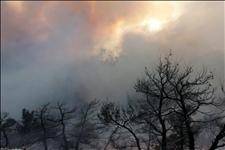 Smoke, fire, strong winds and high temperatures are an explosive combination that once again raised panic levels on Gran Canaria on Wednesday night, barely two weeks after the island suffered its worst ever environmental tragedy when 8,000 hectares of forest land were destroyed by callous arsonists.

A small fire near the town of Ingenio, which was quickly brought under control, revived memories of the recent nightmare. Guardia Civil officers investigating the incident are convinced that the blaze "may have been started deliberately" although there is insufficient material evidence available at this stage to prove their suspicions.

The point of origin of the blaze was the Hoya de la Perra dried-up river bed complex that has been constantly targeted by arsonists over recent years. It started at around 8.30pm near the Cazadores reserver in the Guayadaque area to the southeast of the island in an inaccessible area. Notwithstanding, nearly fifty fire-fighters managed to bring the blaze under control by 12.45am and only around two hectares were lost, according to a regional government source, although Local Police estimate the damage at five.