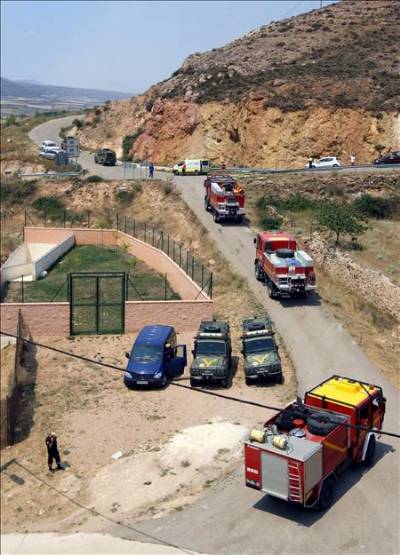 ANOTHER fireman has died tackling a blaze – this time in Aliaga (Teruel province).

The inferno has already wiped out 10,000 hectares and hundreds of people have been evacuated from their homes.

In total, ten forest fires started up in Aragón this week, of which seven continue to burn.

They are said to have been caused by an electric storm on Tuesday which involved more than 5,000 bolts of forked lightning.

Ramón Conejero, 44, from Teruel, lost his life when the fire engine he was driving tipped over the edge of a gorge.

His funeral will take place today.

Over 20 hydroplanes and helicopters have been working throughout daylight hours to control the flames, with approximately 700 professionals fighting the blaze round the clock.

Three-quarters of the affected area is within the municipal boundaries of Aliaga, with the rest of the fires being in and around Los Olmos, Alcorisa, Cedrillas, Corbalán, Alloza, Valdeltormo and Mazaleón (Teruel province) and Morés (Zaragoza province).

About 1,600 people have been forced to flee their homes.