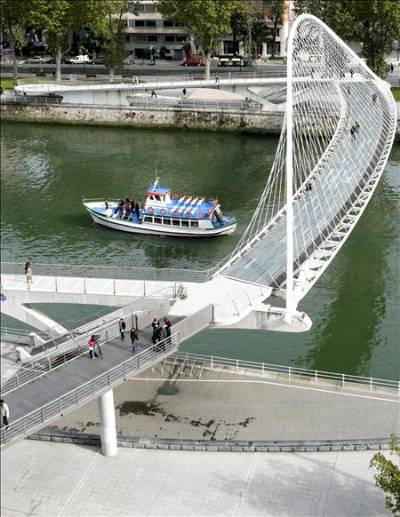 Valencian architect, Santiago Calatrava, has donated the 30,000 euros damages he was awarded by the courts for having another architect's work added to his Zubi-Zuri bridge to a charity in Bilbao.

La Casa de Misericordia in Bilbao was the lucky recipient of the money awarded by a court in Vizcaya after ruling that the walkway, designed by Japanese architect Arata Isozaki, that was tacked on to the end of Calatrava's Zubi-Zuri bridge in Bilbao, was an infringement of his intellectual property rights.

According to La Casa de Misericordia, Calatrava has donated the entire sum of his damages to the charity in recognition of the excellent work it does in the city.

The charity's spokesperson, Antonio Barandiarán, explained that it was in fact La Casa de Misericordia that had approached Calatrava about donating the damages awarded, knowing that the court case had been brought as a matter of principle, not for economic gain.

"Calatrava is pleased," said Barandiarán, "that the money is going to a charity which is very much 'a part of Bilbao'".  La Casa de la Misericordia was founded in 1774 and is dedicated to caring for the elderly in its residential care homes in San Mamés, next to Athletic's football ground.

Bilbao city council was liable for a third of the 30,000 euros damages, with the remaining two thirds being paid by two separate construction companies.