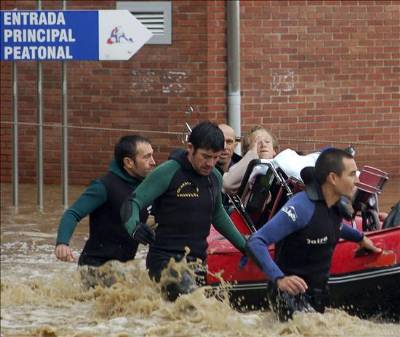 The rivers Piloña, Deva, Nalón and Sella have burst their banks in a total of 16 places today, causing widespread flooding of roads and railways in Asturias.

More than 150 people have had to be rescued by boat and by helicopter after being left stranded by the rising water.

Late this afternoon, the most worrying situation was in the towns of Pravia, which lies at the mouth of the river Nalón and Arriondas, in the Sella basin, where the military have had to be called in to help the emergency services.

The river Nalón is expected to burst its banks this evening because of the massive volume of water flowing into it from the Narcea, one of its tributaries.

The situation was also serious this afternoon in Villaviciosa, Ribadesella and especially Arriondas, where the entire Hospital Grande Covián and an old people's home had to be evacuated because the river Sella burst its banks, leaving the town completely cut off by road (picture above). 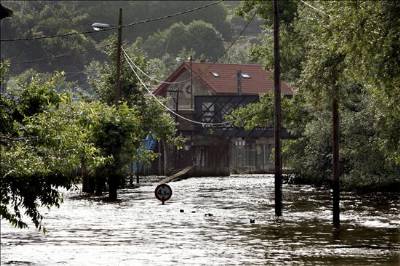 Train services between Asturias and Cantabria, which were suspended yesterday, will not be operating for several days yet after a bridge collapsed in Soto de Dueñas, and a further seven local lines have also been affected by the flooding (picture, right).

Eleven schools and colleges in eight different towns also had to be evacuated, one of which was holding university entrance exams at the time.

The search still continues for the elderly man from Vegadeo, who disappeared last Friday in the flooding that took his wife's life.

The government of Asturias has no intention of lifting the maximum alert, but the president of the principality, Vicente Álvarez Areces maintains that the situation "is under control".

IT FEELS as though it's been raining almost non-stop since the lockdown began – or at least 50% of the time, with much of the other 50% bringing ominous-looking clouds. But this is not as grim as it sounds;...

How to recycle properly, why bother, and where it all goes

FASCINATING footage of what our planet looks like when the human race stays indoors and most industry and mechanical transport shuts down has been going viral in the last few weeks – after all, it's not something...

SPAIN is basking in near-summerlike weather and will continue to do until at least the weekend, according to the State meteorological agency, AEMET. Considerably warmer than usual for the time of year, practically...

SPAIN'S consumer authorities are looking into Ryanair's claim that it is the 'lowest-emission airline in Europe', amid concerns that this may be influencing planet-conscious passengers in their choice of...

SPAIN'S government is once again going through the weekly applications to jump forward a 'Phase' which, if agreed, would take place from Monday – and so far, only the Comunidad Valenciana and the northern...

NURSES, doctors and other healthcare staff ranging from cleaners to porters will collectively receive this year's Princess of Asturias Award in the 'Concordance' category, the Royal household has confirmed....