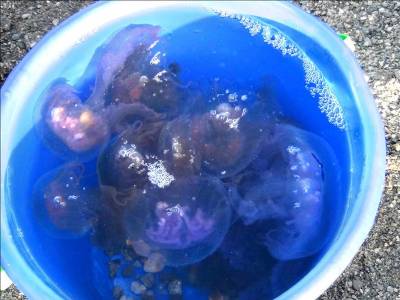 THOUSANDS of sunseekers have been treated for jellyfish stings following a plague of the pests on the Costa del Sol.

Red Cross volunteers have been working constantly providing first aid to bathers who have fallen victim to the Pelagia Noctiluca, a species which has a particularly violent sting.

This type of jellyfish is the most common on the Costa del Sol and are difficult to spot, as they are less than two inches in diameter.

But another frequently-sighted type is the terrifying Rhizostoma Pulmo, which are not easy to miss as they weigh several kilos each.

Many beaches in the area – in particular Vélez-Málaga – are flanked with small jellyfish preventing bathers from safely entering the water.

Instead, many are amusing themselves by going out with nets and catching them, say Red Cross representatives.

They reveal that they are treating up to 200 people a day for jellyfish stings.

And officials going out in boats to clear up the creatures caught nearly four tonnes of them in one day this week.

First-aiders working on the beach said they should be the first port of call for anyone who suffers  a sting, after which they should immediately attend a medical centre.

They add that under no circumstances should a jellyfish sting be washed in fresh water, and that the old wives' tale about urinating on the affected area does nothing to help and can actually make the problem worse.

Jellyfish tend to wash up on Spain's shores during periods of low rainfall, particularly when there has been a sudden rise in temperature and there is a shortage of turtles – natural predators of jellyfish – to control the population.

They prefer warm and, where possible, fresh water.