Chaos in the Canaries as storms sweep the islands

Chaos in the Canaries as storms sweep the islands 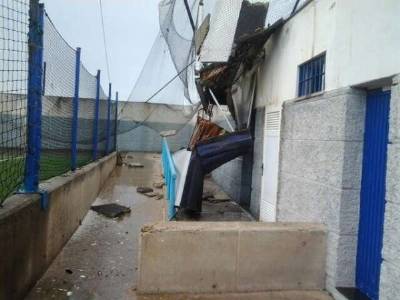 GALE-FORCE winds and rain battering the Canary Islands have caused roads to be cut off and parts of buildings to come down, especially in the Las Palmas area where emergency services were called out 38 times yesterday (Saturday) alone.

A roof fell off a warehouse on an industrial estate near the provincial capital of Gran Canaria, blocking off the C/ Rafaela de las Casas in neighbouring Miller Bajo and several solar panels were ripped up and left scattered on the Las Coloradas football ground in La Isleta, leading to the cancellation of all the weekend's competitions.

All traffic on the C/ Practicante Antonio Henríquez – the main road to Tenoya – was cut off after two lamp posts blew down, but reopened three-and-a-half hours later at 15.30hrs once emergency services had managed to clear the carriageway.

Aerials, waste-bins, walls, fencing and parts of roofs came down between Friday night and Saturday morning, meaning police and firefighters had their work cut out.

A man's body was also found at around 13.30hrs off the Agujero beach in Gáldar, also in Gran Canaria, and has yet to be identified, but emergency services have not confirmed whether his death was the result of the storms.

He may have been washed out to sea by high tides caused by the gales.