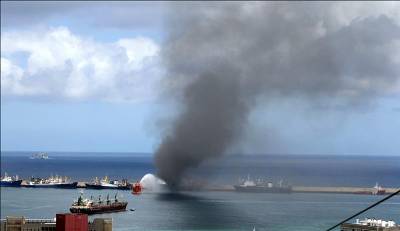 ANOTHER fuel slick has been found as a result of the Russian fishing boat fire - this time at just three kilometres from the coast of Gran Canaria.

Whilst the original spillage, of nearly four miles long, is said to be heading south-west into the Atlantic and is over 90 kilometres away from the Canary Islands, the latest oil leak is dangerously close to some of the area's most popular tourist beaches.

It stretches along a two-and-a-half-mile area of sea, occupying the horizon of the Veneguera coast and is fragmented and interspersed with rubbish.

Spain's public works and infrastructure minister Ana Pastor says it has not been confirmed that the spillage has come from the Oleg Naydenov, which was towed out to sea after going up in flames in the port of Maspalomas, but that authorities were 'treating it as though it was'.

Crisis meetings are planned for Thursday with towns which may be affected by the latest oil slick - Mogán, San Bartolomé de Tirajana, and Santa Lucía.

The Veneguera coast is right in the heart of a biosphere reserve, home to thousands of endangered species of flora and fauna.

Authorities in the area say the spillage reaches from the Descojonado point in La Aldea through to the limits of Maspalomas, a beach heavily frequented by Spanish and European tourists in spring and summer, who account for the bulk of the area's economy.

Coastguard officials are working tirelessly to rescue as many sea creatures as they can.

Their first 'patient', a Loggerhead Turtle they named Madonna, has fully recovered and been released in a clean part of the sea, and a brown gull has been nursed back to health and is expected to be well enough to fly within a week or two.