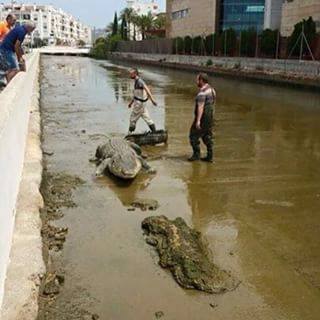 PASSERS-BY reacted in terror when they spotted a crocodile in the Sa Llavanera stream in Ibiza's so-called 'Golden Mile' – although some of the braver ones stopped to take a 'selfie' with the sharp-toothed reptile.

A bus driver covering a regular round-town route along the Avenida Juan Carlos I was ordered by his passengers to stop so they could take a closer look, whilst guests and security staff at the Ibiza Gran Hotel screamed their heads off – then burst out laughing.

Gustavo, as the croc has been baptised – and which is Spain's name for Kermit the Frog on The Muppets, but with no connection – is in fact a papier mâché model which took sculptor Andreu Moreno nearly two years to make.

He is named after the famous Gustave, a six-metre crocodile living in the Nile in Burundi, the largest-known of his species in Africa.

And not only does Moreno's work look very lifelike – being five metres (16'6”) in length and weighing 90 kilos (about 14-and-a-half stone) – but the fact he is on a leash to stop him moving meant those who spotted him could have been forgiven for believing Gustavo was indeed one of the planet's oldest and scariest species.

Moreno says he has always walked past the Sa Llavanera – a wide, flowing, shallow stream about ankle-deep – but it was not until two years ago when he was on his daily stroll past with a friend that he realised nobody had noticed, let alone done anything about, the 'poor condition' the water way was in.

“So I decided to plant a crocodile in it,” he explains.

After 500 hours of painstaking work, he achieved his goal of what was once considered an eyesore turning into a tourist attraction where almost everyone who passed it stopped to take a photo.

Even an ambulance double-parked with its four-way hazard lights on so the drivers could take a selfie with Gustavo, Moreno reports.

Some pedestrians were said to be genuinely afraid and did not realise, until they were reassured by other members of the public, that he was not real.

Gustavo has now been moved to his owner's up-market beach club on the Platja d'En Bossa, one of Ibiza's most élite, expensive and exclusive coasts, due to fears the current in the stream will wash him away.

But he is likely to go back to the Sa Llavanera on odd occasions to resume his role of putting it on the holiday photo map.

DOWNPOURS, thunder and lightning are heading for Spain after a sweltering few days and set to ease the humidity and cool the country down for a short while, says the State meteorological agency, AEMET. But bad news for...