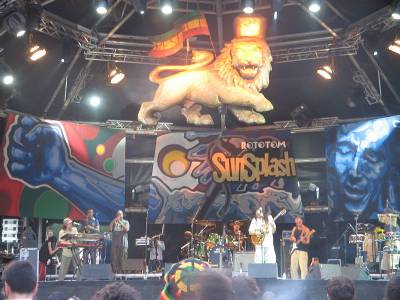 FIVE artists have boycotted the famous Rototom Sunsplash Reggae Festival in Benicàssim (Castellón province) after finding out the Jewish band Matisyahu would be playing, since they object to the front man's views on the Palestine-Israel conflict.

Three participants in the Social Forum area – association Pallasos en Rebeldía, María Carrión from the group FiSahara and Saharan activist Hassanna Aalia - cinema director at the Film Festival part of the Rototom, Fernando García-Guereta, and an artist from the Showcase music area, Saharan rapper Yslem Son of the Desert, have pulled out.

They are all members of the Boycott, Non-Investment and Sanctions for Israel pressure group based in the Comunidad Valenciana and have written an open letter to other artists taking part in the festival on Saturday, August 22, calling for them to 'reconsider'.

Matisyahu, fronted by the American-Israeli artist of the same name, 'has taken part in pro-Sionist festivals', has 'publicly stated he is on Israel's side' and that 'Palestine does not exist', according to the campaigners.

Another reason for their decision to boycott the festival is the airing of the documentary Congo beat the drum, starring two musicians from Tel Aviv, since the show had 'benefited from advertising by the Sionist State' and from an award at the Jerusalem Film Festival, which had been financed by the State of Israel.

“We need to boycott the Israeli strategy of using arts and entertainment to whitewash the ethnic cleansing of the people of Palestine and present an abhorrent situation in legal and human rights terms as 'normal',” the association's open letter reads.

Rototom Sunsplash organisers responded publicly via the festival's Facebook site, saying the event has 'a 22-year history of respecting peace, justice and human rights' and of 'encouraging dialogue as the best way of resolving conflict'.

They say they condemn 'anyone who brings with them messages of intolerance, hatred or violence'.

“We have never invited anyone to the festival who intends to spread hate messages, and this criteria has been used in exactly the same way when inviting Matisyahu here.

“In light of the controversy, we have contacted Matisyahu to find out his views on the Israel-Palestine conflict and on Sionism.

“His response was very patent, given that he has never been a political activist and does not bring his personal views to his performances or song lyrics.

“The fact that he supports Israel does not in itself mean he backs their policies of violence against the Palestinians, so we did not consider it necessary to exclude him from the festival on these grounds.”

According to Rototom's manager Filippo Giunta, Matisyahu 'has never spoken of anything political in his songs – only of love, peace and universal brotherhood'.

“Only if anyone can prove to us Matisyahu has been inciting hatred, will we block his presence at the festival,” Giunta concludes.

Rototom Sunsplash is Europe's largest reggae festival and was held in various locations in Italy until 2010, when it moved to its current venue, Benicàssim, on Spain's east coast.

It does not only include reggae concerts, but also different branches of the arts, plus campaigners and cultural initiatives such as documentaries and speeches relating to everything from Rastafarianism and combating racism to legalising weed.