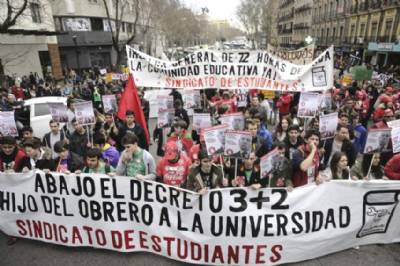 STUDENTS at universities and sixth-forms across the country staged a series of protests today (Thursday) over plans to alter the length of time it takes to study for an undergraduate and a master's degree.

Their demonstrations led to metro traffic in Barcelona being disrupted along two entire lines, between the stations of Bellaterra and Sant Quirtze del Vallès.

Other gatherings and marches took place in Teruel, Zaragoza, Torrelavega and Santander (Cantabria), Almería, and various parts of Tenerife and Gran Canaria.

Later ones have been planned for Valencia, Málaga, Murcia, Salamanca, Valladolid, León, Granada and on the island of El Hierro in the Canaries, plus further protests in Barcelona.

Their main gripe is Spain's plan to bring university study more in line with the rest of Europe – at present, it takes four years to study for an undergraduate degree and just one year for a master's.

Authorities want to adopt a UK-style model – three years for a bachelor's degree and two years for an MA or MSc.

At present, the system means Spanish students study the equivalent of the first half of a master's degree during the final year of their undergraduate career, meaning a higher degree – which is much more frequently studied in Spain than in the UK – takes less time.

The government's argument is that non-Spaniards who studied a three-year degree have trouble getting their full qualification accepted in Spain, hampering them for job-seeking, whilst conversely, Spanish master's degrees do not carry enough credits for post-grads to apply for PhD courses elsewhere in Europe.

Students, however, are concerned about the quality of an undergraduate degree reducing and tutors being made redundant – although there is no evidence to support this.

Mostly, though, they are worried about the costs involved – a year's worth of study at master's level can be two to three times the price of a year at undergraduate level.

As yet, the government has not made any proposals that might ease the situation.

Students are also protesting over the practice of compulsory unpaid work experience which forms part of modern-day degree study, saying they spend a whole year without any income for living expenses whilst many firms keep jobs filled by rotating students on placements, avoiding wage bills.

Finally, they railed against changes in education laws brought in by ex-minister Wert – among which includes a minimum grade of 65% in sixth-form final exams to be eligible for a cost-of-living grant at university, and a minimum of 55% to qualify for tuition fees being covered, even though the pass mark is 50%.

TEMPORARY lay-offs as a result of the Covid-19 pandemic will be extended until September at the request of unions and companies, in order to guarantee everyone keeps their jobs long-term. Lockdown saw huge swathes of...

THE START of the 2020-2021 academic year will be different from ever before, but some of the consequences of Covid-19 precautions will be positive progress. Class sizes are expected to shrink – a maximum of 15 to 20...

TEMPORARY lay-offs during lockdown can remain in place until June 30, by which time the government expects normality to have returned to the business environment, confirms work minister Yolanda Díaz. At first,...

Some industries go back to work, but lockdown not over yet

SPAIN'S national government has authorised some industries to restart their activity, subject to certain restrictions, but the general public is not otherwise allowed to leave the house for anything other than the...