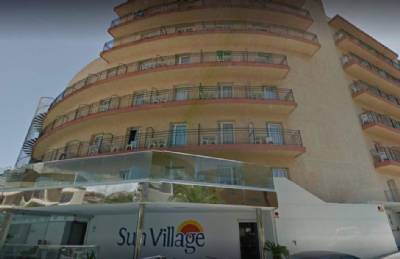 ELECTRICITY board Endesa has accused a Costa Brava hotel complex of 'illegally' hooking itself up to the street power supply after its own was cut off a year ago due to non-payment.

The four-star Sun Village resort in Lloret de Mar (Girona province) had run up a debt with Endesa of €150,000 by summer 2015, and the utility board cut off the supply.

This week, when Endesa was carrying out repairs on a power fault in the building which backs onto the hotel, it had to cut off the electricity serving the street and other public areas in the vicinity.

As a result, the generator which the hotel was using in addition to its alleged illegal supply had to provide power for the entire resort and, as it was overloaded, burst into flames.

Emergency services, including 10 fire engines, had to evacuate 238 guests and put them up in other hotels belonging to the same chain.

Firefighters had a difficult and dangerous challenge on their hands, since the electricity and gas supply on the roof terrace was surrounded by huge vats of diesel which did not comply with safety regulations.

By ascertaining that the overloaded generator had caused the fire, and that the overload started at the point when Endesa cut off the street supply, suspicions were already raised about what was happening.

And Endesa claims it has photographic evidence that the hotel had hooked up directly to the street supply and says the Mossos d'Esquadra, Catalunya's answer to the Guardia Civil, have launched a full inquiry.

Sun Village's management, however, say the €150,000 debt with Endesa was run up by the previous owners, and that the new proprietors had been using a generator for the last four months for all their power.

Lloret town council initially closed the hotel as a precaution after technicians concluded that the electric and gas supply system did not meet safety requirements.

Its trading licence has since been withdrawn until such time as the police, Endesa and the gas company can confirm everything is above board.

Endesa has also cut off the supply to another hotel in Lloret, it says – the three-star Savoy, 200 metres from the Fenals beach and with 164 suites.

The utility board claims the Savoy had also tapped in to the public supply to avoid paying for its power.

According to Endesa, 'less than 1%' of electricity supply fraud in Spain is carried out by families or households who are too hard-up to pay their bills.

In tapping into the street supply, offenders cause the electricity board to lose power it generates and it therefore has to increase its prices, meaning the ordinary householder or trader is forced to pay much higher bills.