SPANISH coastal towns have been upheld as an international example by a British broadsheet and contrasted very favourably with the situation on UK beaches.

The Telegraph reporter Tobias Ellwood said 'Bournemouth beach should have been closed to new visitors in the morning and the council should have done more', and shows video footage of huge crowds practically on top of each other on the sands in the popular British coastal city alongside two young men lying about a metre and a half (five feet) apart in a roped-off plot on a beach in Spain.

Ellwood's geographically-challenged headline, “Bournemouth vs Benidorm: What British beaches should learn from the Costa del Sol,” is likely to have attracted a string of corrections in the comments section – Benidorm is in the Mediterranean province of Alicante in the east, whose coast is known in tourism terms as the Costa Blanca, whilst the Costa del Sol is the shoreline of the province of Málaga in the south, around 700 kilometres away – although the Spanish beaches flagged as paragons of Covid-19 safety are based in the latter.

British nationals based in Spain, and a huge number of UK residents, reacted in stunned horror at footage of the Dorset coast and fury at hearing of drunken fights, three stabbings involving eight arrests, and over 40 tonnes of mostly-plastic rubbish left behind on what has historically been a family beach and retirement hotspot.

And it was not just Bournemouth – tens of thousands of people are known to have gathered in close proximity on the beaches in nearby Poole, and in Southend-on-Sea (Essex), nobody wearing masks as these are very difficult to get hold of in the UK, according to several sources from the country.

Many Brits living in Spain have expressed concerns at their compatriots being allowed into the country for their holidays, given the still-rising number of Covid-19 cases in the UK and the widely-publicised behaviour of its citizens living there at the first sign of sun – although the outpouring of rage from UK residents at the scenes shows that, hopefully, these are very much in the minority.

Also, British travellers who are more sensible have pointed out that contact between UK-based holidaymakers and Spain's resident population is likely to be minimal – package trips tend to involve enclosed resorts where guests are of the same nationality, whilst holiday home owners have more contact with Spain generally and will be very aware of how their resident friends and neighbours observed lockdown – and continue to take extreme precautions – with few or no complaints against the actual régime or its imposition; only, perhaps, frustration about how inconvenient it all was, whilst recognising that there was no other alternative.

Also, Spain takes the temperatures of all airport arrivals and has them fill in a questionnaire including their contact details, meaning anyone who may be harbouring Covid-19 could be filtered out at the border, and if they are asymptomatic and pass it on, anyone who has been in close proximity to them will be notified immediately and ordered into self-isolation.

Tobias Ellwood, in his Telegraph column, writes that in Spain, some beaches have created a 'traffic-light' access system – when the lights are red, nobody is allowed entry, and if they are green, it means there is space – with limits on numbers allowed on the sands.

Some town halls, he writes, have banned items like balls and lilos, which take up space and could come into contact with people who are not their owners.

In his mentions of the Costa del Sol – rather than Benidorm - Ellwood explains how monitors, or 'informers', paid by town councils, are on site to tell visitors what the rules are, direct and order bathers, and to call the police if anyone flouts the regulations. 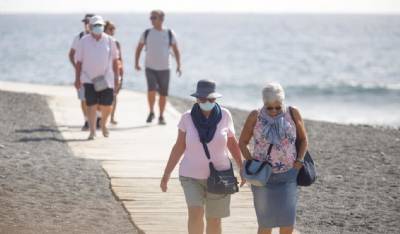 He highlights beaches in Spain which have set out priority zones for the over-70s and a separate strip for children under 10 to play in, plus roped-off 'plots' for bathers in family or friend groups or individuals – and how some beaches in Málaga and Tarifa (Cádiz province) were shut to the public because too many people were going there.

Given that town councils in Spain are responsible for 'managing' their beaches in light of the pandemic, rules will differ from beach to beach – they may be more relaxed on those which are traditionally sparsely-occupied, but even those are likely to have spaces allocated.

Most have set aside the first six metres (around 20 feet) in from the sea for people who want to go walking, running or, where permitted, play ball games, and separate exits and entrances where possible.

'Informers', Red Cross workers, or the Local Police – or all three – are present on practically every beach in the country, with the powers to intervene if they see anyone breaking the rules.

The general feel among the public, however, is that Spaniards, and permanent residents of other nationalities, will largely not deliberately cause problems that require intervention, and are unlikely to put up resistance if their behaviour is corrected – the minority who may do will tend to face enormous social pressure on top of the threat of fines, arrest or both.

Tourists from any country who fail to be sensible and responsible are likely to get a rude awakening when they misbehave on holiday in Spain, and discover that the stereotypical 'mañana' attitude certainly does not apply when it comes to public safety and the welfare of society as a whole.

Second photograph by the tourism board in Sanxenxo (Pontevedra province, Galicia), one of the north-western region's most popular coasts