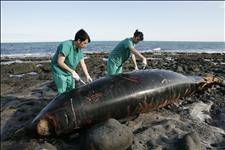 The Canary Islands Green party are calling for the sacking of Defence minister José Bono after a dead dolphin was found washed up on a Fuerteventura beach yesterday, and warn that they will be reporting the Spanish government to the European Union.

In a press statement released this morning they insist that, "there is not the slightest doubt that there is a direct link between the appearance of another dead dolphin on Fuerteventura´s Roque beach and the recent "Noble Javelin" NATO manoeuvres."

The statement recalls that the military exercise was undertaken "despite having been condemned by local and regional authorities, ecologists and greens, who all warned of the dangers to local marine life."

Experts from Las Palmas University Veterinary Faculty have already examined the body of the 6m long, 2 tonne female dolphin, and have confirmed that it shows the same symptoms as other dolphins killed by military active sonar equipment during similar manoeuvres carried out in 2002 and 2004. They have also confirmed that it has been dead for about a week, coinciding with the recent exercise.

The Greens are calling for the removal from office of Defence minister José Bono, who they accuse of "failing to deliver promises made to the House of Congress and the Senate that active sonars would not be used close to shore during the "Noble Javelin" military exercises."

They are also calling for the sacking of regional Environment minister Augusto Lorenzo, "who gave public backing" to the recent exercise.

The statement also explained that they will be reporting the Spanish government to the European Union for breaking a Europe-wide moratorium on the use of active sonar approved by the European parliament on the 28th October last year."