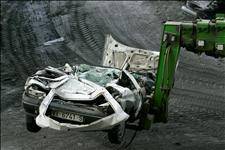 The bodies of both men have now been flown back home to Ecuador from Torrejón military airfield on planes arranged by the Spanish government.

Mr Estacio's body, like that of his compatriot, Carlos Alonso Palate, was found still inside his vehicle, buried under an enormous pile of rubble.

Meanwhile, at the bomb site, work to clear away what remains of Module D of the new Terminal 4 building has gathered pace now that the last body has been located.

The photo shows the wreck of the car in which Mr Estacio was sleeping while awaiting the arrival of a passenger from his home country.

The dead body of 34 year old Carlos Alonso Palate was found inside his car at 6.45pm yesterday evening by a rescue team at Barajas airport.

The car was found underneath a massive quantity of rubble caused by the car bomb attack on the car park of the new Terminal 4 building carried out by ETA early last Saturday morning.

The search continues for the body of a second missing man, 19 year old Diego Armando Estacio, who is also from Ecuador.

Before Carlos's body had been found, his uncle, Luis Antonio, told a journalist from the 20minutos website that he was a "very happy and dynamic person, who always sent money to Ecuador." It transpires that Carlos, who was the main breadwinner for his family back home, worked in a plastics factory in Valencia.

It was decided during a meeting yesterday attended by family representatives and the ministers of Employment and Justice, Jesús Caldera and Juan Fernando López Aguilar respectively, that the descendants of both men would be granted Spanish nationality. 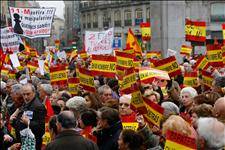 Hundreds of members of the Association of Terror Victims (AVT) staged a protest outside the headquarters of the PSOE socialist party headquarters last Sunday night in response to the car bomb attack at Barajas airport last Saturday that now almost certainly seems to have claimed the lives of two Ecuadorian men, who are still missing among the rubble.

As the protesters, who were carrying Spanish flags and marching behind a banner with the AVT slogan 'Surrender? Not in my name,' made their way to the calle Ferraz, where a large contingent of police in riot gear formed a cordon around the PSOE central office building, they shouted slogans demanding president Zapatero's resignation.

Earlier, in the Puerta del Sol, AVT president, Francisco José Alcaraz, read out a statement demanding that the government goes further than merely "suspending" the peace process, and demanded that it "demands that the Basque country Communist Party, that is the heir to the Batasuna-ETA legacy, condemns yesterday's brutal attack, and should they not do so, that they be expelled from all of the region's institutions."

Mr Alcaraz went further by calling for the government to arrest and charge all the terrorists with whom there has been contact, including "the murderer, José Ternera." Addressing the terror organisation directly, he told them "Spanish society will not surrender. Memory, dignity and justice are not negotiable. Civil rebellion will remain unstoppable until the terrorists and all their plans have been destroyed."

PROPERTY tycoon Juan Carlos Quer has thanked his daughter posthumously on Twitter for her 'legacy' after her rapist and killer, José Enrique Abuín Gey, was sentenced today to permanent reviewable prison. Juan...

Elche woman kidnapped by Peruvian cult 'gets on with...

A YOUNG woman from Elche lured into a dangerous cult in Perú has said she can 'now get on with her life' after hearing her captor has been jailed for 20 years. has heard from authorities in the South American...

AN EIGHT-YEAR-OLD boy's killer could become the first woman in Spain to be sentenced to permanent prison subject to review now that she has been found guilty of the murder in February 2018. Ana Julia Quezada, 45,...

Man tries to steal Ale-Hop cow, but herded off by security

THE ANSWER to the burning question, “has anyone ever tried to steal the Ale-Hop cow?” is now officially 'yes' – a man was arrested in a Palma de Mallorca shopping centre after being chased by security...