Semana Santa explained: what goes on beneath those strange pointy hoods

Semana Santa explained: what goes on beneath those strange pointy hoods 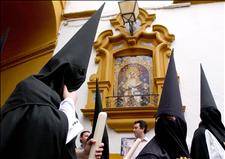 Given that Spain is known for its colourful, drunken, noisy fiestas that fill the streets with music, flamboyant costumes and a party atmosphere, the first sight of a Semana Santa parade can be somewhat alarming for the uninitiated.

Forget fireworks and live rock bands. Easter week processions are a mass mourning and public repentance of the festeros’ sins. Walking barefoot for hours, costaleros (or pall-bearers) staggering under the weight of the huge, graphic crucifixion scenes, and even self-harming, leave those who know no better open-mouthed and wondering why on earth anybody would put themselves through all this voluntarily.

The answer is, of course, tradition, immense pride, solidarity, a bringing together of the community and in many cases, religious devotion. Churches are open extra hours so townspeople can attend the numerous masses programmed and confess to their sins. Easter week, or Semana Santa, is a time when we recognise and repent for our wrongdoings, reflecting the fact that Jesus Christ died on the cross to save us from ourselves. 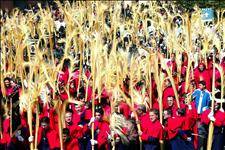 The self-flagellation scenes often fill first-time spectators with horror, but in fact in most towns these acts are merely symbolic. Participants in the parade hit themselves with birch twigs, although in practice they are merely going through the motions of doing so. However, some fanatics and true devotees go to the extremes of beating themselves raw, and then being forced to split open their wounds with shards of broken glass to cut the blood-blisters and release the subcutaneous pressure.

Fortunately, this is not a regular sight and only occurs on occasion in the much larger parades. Mostly, the only sign of blood you will witness is the open sores on the hands of the drummers, who have been beating a solemn tattoo from around 06.00 hrs on and off until the early hours of the next morning. Yet far from being a downside of the festival, most participants are actually proud of their raw knuckles, considering them on a par with war-wounds in terms of pride. 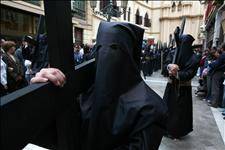 One of the most striking, and perhaps most eerie, spectacles of the festival are the Nazarenos (based on the people of Nazareth, as the name suggests) in their tall, pointy hats and matching robes with their faces completely covered, apart from their eyes. The sight of hundreds of slow-moving unidentifiable figures in these ghostly, alarming costumes can be a little unsettling, and they are frequently compared to the Ku Klux Klan.

One can be forgiven for believing the Ku Klux Klan and the Semana Santa parades were borne of the same idea, since the costumes of both are practically identical. Despite this, there appears to be no connection whatsoever between the two, although the Nazarenos came first. The Ku Klux Klan used their costumes for disguise, for the Christian connotations and perhaps the fact they were usually white had a racial significance. Although there is the possibility that there were members of the Klan who had witnessed Semana Santa parades and took their inspiration from these, there is no defined link at all.

As for why the costumes are used in Semana Santa celebrations, the origins remain a mystery but the purpose is simple – their faces are covered in mourning, and also as a sign of shame for the sins they have committed throughout the year. Somehow, though, they manage to soften the blow for spectators not in the know by the Nike trainers they wear with their costumes and the can of Amstel and half-smoked Ducado they are often seen carrying – a reminder that Semana Santa is, essentially, simply a fun festival.

During the encuentro (meeting) between the effigies of the mourning Virgin Mary and the resurrected Christ on the morning of Easter Sunday, where it is traditional to throw tonnes of rose petals – or, better still in some towns, masses of sweets – the Nazarenos remove their hoods to mark t

TWO major religious holidays in Spain will have been celebrated behind closed doors this year for the first time in most residents' memories – first Easter, for the Christians, and since Friday, the Holy Islamic...

A PRIEST based in Galicia managed to ban mobile phone use in his church – and warn against it whilst driving – using a humorous message that has gone viral on social media. Xosé Manuel Lence, vicar in A Ramallosa...

SPAIN'S first-ever openly-gay priest has died at the age of just 55, according to his family. Father José Mantero, based in Valverde del Camino in the far south-western province of Huelva, bravely defied the...

SPAIN'S two million Muslims are celebrating the final day of Ramadan today (Friday) after sundown last night brought an end to their month-long daytime fasting. Today marks the festival of , which starts with a mass...

Spanish pupils 'one of world's most accepting'...