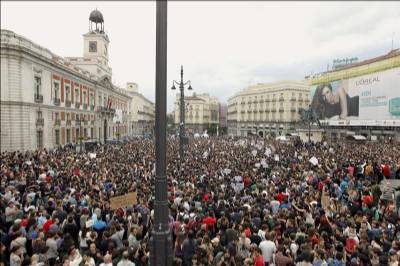 More than 10,000 people have gathered at the Puerta del Sol in Madrid to demand political and social change.

There is a notable police presence, but there so far the protest has been a peaceful one in a carnival atmosphere and there
have been no major clashes to date.

In the centre of the Puerta del Sol square, there are thousands of people chanting and waving banners with slogans like "make the guilty pay for the recession" or "the struggle is on the streets, not in parliament".

The demonstration has attracted huge media attention, with journalists from a number of different newspapers and TV stations down in the square with the protestors.

At 11pm, one group of protestors starting preparing a to camp out over night, as was the case last night and as the protestors intend to carry on doing until election day on Sunday.

The original protest was held in central Madrid on Sunday and resulted in 19 people being arrested for public order offences and many others sustaining minor injuries.

Similar protests are being held in 13 different Spanish cities, as well as at Spanish embassies around the world, including London.

PRINCESS Leonor and her sister, the Infanta Sofía spoke to the health services at the weekend and thanked them for everything they are doing for society – a speech in which Sofía gave a few words of her own in...

WHO praises Spain's 'heroic response' to...

A WORLD Health Organisation inspection in Spain has concluded that it has acted 'heroically' and that it did, in fact, move humanly quickly after the Coronavirus spread like wildfire within days. Head of...

KING Felipe VI has renounced his rights to his father, the retired King Juan Carlos I's inheritance, and has withdrawn the latter's stipend paid to him from the Royal household. The receives €200,000 a year...

NURSES, doctors and other healthcare staff ranging from cleaners to porters will collectively receive this year's Princess of Asturias Award in the 'Concordance' category, the Royal household has confirmed....