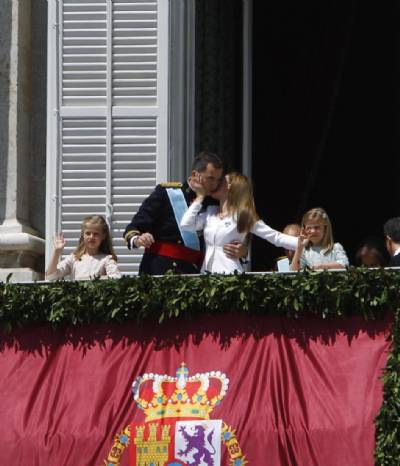 TOURISTS filled the streets of Madrid this morning for the proclamation of King Felipe VI with visitors from the UK, China, Hong Kong, the USA and several Latin American countries – but not all of them had realised today was such an historic moment for Spain.

A 23-year-old student from the USA, based in Sevilla and travelling through Madrid on her way to start the famous Santiago pilgrimage burst into tears when she saw the police and Armed Forces flanking the city centre.

She rang her family in the States in a panic to tell them there had been a coup d'état – but fortunately a news reporter explained that the extra security was because of the coronation of Felipe VI.

The young student then began to leap around euphorically, shouting, “how lucky am I!”

A couple from Texas standing in the Plaza Callao, moved to tears by the event, said they thought the Royal children Leonor and Sofía were 'real cute' and that King Felipe and Queen Letizia 'presented a very youthful image of Spain'.

But they were surprised not to see a huge and solemn religious ceremony, since they had always believed Spain was a 'very Catholic country'.

A woman on holiday from Hong Kong said she only realised it was the coronation because she had seen Madrid decorated and asked someone in the street what this was for.

Two English girls, who professed to be in favour of the Monarchy in both countries, said they already knew the coronation would be taking place while they were in Madrid and that the former Monarch, King Juan Carlos I had abdicated – but added that the Queen of England, HRH Elizabeth II, whom they described as 'wonderful', would never do so.

A Colombian tourist living in Buenos Aires said she had rushed from Madrid airport, still jet-lagged, dumped her suitcases at her hotel and gone straight to the city centre to 'witness this historic moment', and to 'watch them [the Royals] go by and see what they were like'.

And another couple from Argentina said they had done exactly the same and that watching the procession made them feel like 'children of the mother country'.

Rosana, from Colombia, on holiday in Spain with her family, said King Felipe VI was 'a very decent person' and thought he was 'a good choice' as head of State, adding that she was thrilled to be able to witness in person 'a spectacular show that will never happen again'.

In practice, and assuming Spain does not buckle to pro-republican pressure, when Felipe VI eventually ceases his role either through death or – like his father – abdication, the newly-titled Princess Leonor, the youngest European heir to the throne at eight years old, will be crowned queen – something that many young adults today may still get to see in their lifetimes.

Another young man from Ecuador who was among the crowds packed against the barriers on the Gran Vía to watch the parade said such things were 'never seen' in his country.

“We only have the Army over there. These things [the coronation] are very European,” he told reporters.

Two young Chinese girls holding up pictures of the new King said he was 'very handsome' and they wanted to see him.

The coronation – dubbed a 'proclamation' to detract from the pomp and circumstance, in keeping with Spain's current economic crisis affecting millions of residents – has been front-page or page three news in the national press the world over, including Le Figaro and Le Monde in France, and La Repubblica and Il Corriere della Sera in Italy.

In the UK, The Daily Telegraph declared, “Spain welcomes new king after Juan Carlos abdicates,” whilst The Guardian states, “Felipe promises 'renewed monarchy',” referring to the new King's speech in which he 'calls for unity and vows to listen and advise'.

But even then, The Guardian placed La Roja's World Cup humiliation ahead of the coronation in today's issue with the headline: “Spain laments end of tiki-taka era,” and the sub-heading, “Tiki-taxi for Spain: The internet reacts to Spain's exit.”

No outright majority for Sánchez in round one; second vote...

PEDRO Sánchez fell at the first round of his presidential investiture ceremony yesterday (Sunday, January 5), with 10 votes short of a majority – but the number of 'yes' votes was higher, meaning the same...

SPAIN is a step closer to getting a fixed – and elected – government now that Pedro Sánchez has reached a deal with the Catalunya Left Republicans (ERC). The socialist (PSOE) leader already has the backing of left...

SPAIN'S Parliament had everything ready for a possible government-forming session to take place on Monday (December 30), but latest information from the State law service shows that it is unlikely socialist leader...

ONCE again, the King's Christmas Eve speech made strong references to the Spanish Constitution, although this time the monarch expressly referred to Catalunya on one occasion – something he has carefully avoided...

Malú and Albert Rivera snapped by ¡Hola! after confirming...

THE FIRST 'official' photographs of Ciudadanos' ex-leader Albert Rivera and his girlfriend, pop legend and judge Malú, have been published since they leaked the news that they are about to have their first...

This morning, in Madrid's Plaza de Colón, the Presidents of the Congress of Deputies and the Senate, Meritxell Batet and Pilar Llop respectively, presided over the traditional raising of the Spanish flag to mark...

POSTAL votes from overseas have now been counted, changing the election results from Sunday – the right-wing PP has gained another seat, giving it 89, and the Basque National Party (PNV) has lost one, dropping to six....