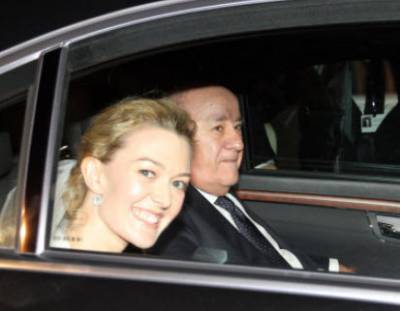 The celebrity couple filled Spain's glossy magazines in February 2012 when they walked down the aisle, Marta wearing a gauze bias-cut, embroidered dress, by designer Narciso Rodríguez.

Her and Sergio's reception menu – comprising typically-Galician and Asturian fare including seafood and hake – was prepared by top chefs Marcelo Tejedor and Nacho Manzano.

They married in the family's enormous manor house, a Baroque-style 17th-century rambling country estate previously owned by the Counts of Torre Penala, and also the venue chosen by Marta's father in 2001 when he married his second wife, Flora Pérez Marcote, Marta's mother.

But this week, she celebrated her 31st birthday dressed in a black evening dress and coat with friends and family and her and Sergio's 18-month-old son Amancio - named after her father, Europe's richest man - although without her husband.

The party was at the same manor house in Anceis, near Cambra (A Coruña) in her native Galicia as she had married Sergio, 30, from Avilés in.

Amancio Ortega senior wore a tie - a rare sight for the businessman, who prefers the casual look - and regional president of Galicia, Alberto Núñez Feijóo also attended among other celebrity guests.

Rumours that all was not well between the couple were thought to be unfounded when Marta and Sergio continued to appear in public together.

But she revealed just 10 days before her birthday that the couple had separated and were planning to divorce.

An economics graduate and top showjumper in her own right, Marta worked in the Inditex headquarters in Paris and in parts of Asia before joining the head office in Arteixo (A Coruña), in preparation for her eventual taking over of the family business.

SPAIN'S president Pedro Sánchez has urged the UK to scrap its plans to change the Brexit withdrawal agreement in terms of the Irish backstop through Boris Johnson's proposed Internal Market Bill. During the...

Princess Leonor asked: “What do you want to be when you...

HEIR to the throne Princess Leonor and her sister, the Infanta Sofía had their eyes opened this week when they visited a centre for deprived children and teenagers in Mallorca, an island where the Royal family usually...