Spain has more bars per inhabitant than any other EU country, study shows

Spain has more bars per inhabitant than any other EU country, study shows 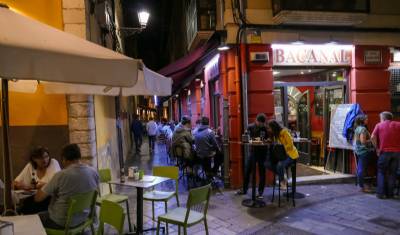 SPAIN holds the European record for being home to the most bars per inhabitant, according to a recent EU study.

The southern region of Andalucía alone has as many bars – which include pubs and cafés – as Ireland, Denmark, Finland and Norway combined, a statistic which will cause many to do a double take, given perceptions of the Irish as being hugely fond of their native Guinness.

If Andalucía was the only region with any bars at all, at 47,000 in total, it would still have enough for each to cater for 1,000 inhabitants in Spain.

But in practice, Andalucía is home to fewer than a fifth of the country's bars – the total number recorded is 279,243 across the whole of Spain, meaning one for every 169 residents.

And this is even in spite of the hangover from the financial crisis leading to 70,000 bars and cafés in Spain closing down in the past four years.

The figure of 169 is only the national average, however – many towns far exceed this.

In fact, Mogán, near Las Palmas on the island of Gran Canaria, has 547 pubs and cafés for just over 23,000 residents – meaning one for every 43 people.

As a result, if every single person in Mogán went to the pub at the same time, there would almost certainly be enough space for them all to find a seat at once.

Anecdotal evidence from other countries hints Spain may be equalled in certain isolated areas – the port town of Harwich, in north Essex, UK, was in the Guinness Book of Records around 15 years ago for having the most pubs per square mile.

But 'pub life' in Spain is very different to in the UK: bars generally serve coffee, soft drinks and alcohol at any time of the day, typically from around 07.00 to midnight depending upon location, frequently offer snacks and sometimes ice-cream, the majority have pavement terraces at the entrance, and are used at every hour by everyone from workmen to families with children, for after-work drinks or afternoon tea, lunchtime coffees and late-night half-pints, or cañas.

Those referred to as 'working men's bars' still serve cakes and coffee, and tea and coffee shops still serve wine and beer, meaning the distinction seen in northern Europe between a café and a pub is very blurred in Spain.

Bar customer pays for 'all the beers he could not order...

A BAR customer in Granollers (Barcelona province) has paid the owners for 'all the beers he could not drink during lockdown'. Based upon the price charged of €2.50 for a (half-pint or 330ml glass), and the...

Spain ditches junk food: Nearly half cut down and switch to...

NEARLY half of Spain's residents have suddenly become more health-conscious in terms of their diets in the past year, according to recent research – although it is too early to say whether two months in lockdown...