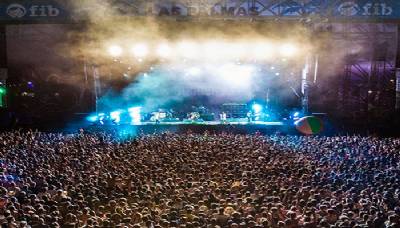 MUSIC festival schedules for summer 2018 are starting to fill up, with The Killers being the first band to confirm their presence at Benicàssim's world-famous FIB International and at least four now a certainty for the Arenal Sound in neighbouring Burriana.

The Killers, led by Brandon Flowers, will bring their greatest hits along with new tracks from their latest studio album, Wonderful Wonderful, to the shores of Castellón between July 19 and 22, 2018 – although they will always be best known for their 2009 epic, Human, based on the Nietzsche quote, “are we human, or are we dancers?”

Early tickets for the full four days of Benicàssim International Festival (FIB) at a special reduced price of €110 have already gone on sale on the event's official website, although the cost will rise from December 14.

Further along the coast in Burriana, the band led by Guillermo Bárcenas and Antón Carreño, Taburete – currently accompanying legendary boy-band Hombres G on tour – has just confirmed its presence at the Arenal Sound Festival, now in its ninth year.

Tickets for the Arenal Sound are now on sale via its website, costing €60 for standard entries and €80 for VIP slots.