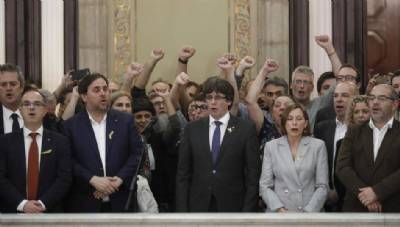 CENTRE-RIGHT Ciudadanos has won the regional elections in Catalunya, but the pro-independence parties combined have scooped up an outright majority, leaving the political situation in the north-eastern region hanging in the balance.

Ciudadanos, led by Inés Arrimadas, netted nearly 1.1 million votes and 37 seats out of the total of 135, compared with just 25 in the 2015 regional election.

These two parties ran as a coalition in 2015, winning 62 seats, meaning their combined total has now gone up to 66.

If they were to band together and form a coalition with the staunchly-separatist CUP, which has four seats and 192,000 votes, they would have 70 out of 135 and a combined outright majority.

The socialists, or PSC, is fourth with just under 600,000 votes and17 seats – one more than in 2015 - which their leader Miquel Iceta is disappointed with, saying: “We have not achieved our aim, even though our result has improved.”

The regional branch of left-wing Podemos, CatComú-Podem – which is not in favour of independence, but believes a democratic and legal referendum should be held at least on an advisory basis – won eight seats with 321,000 votes.

Finally, the right-wing PP – the same party as in national government – came last with just three seats and 182,000 votes.

PP leader in the region Xavier Albiol says: “This is a bad result, and we're worried about the future of Catalunya.”

Meanwhile, from Brussels, Puigdemont says: “The Republic of Catalunya has won out against the Monarch of 155,” referring to the Article of the Spanish Constitution which was triggered after the disputed independence referendum by the national government, forcing the election and taking control of the region for the first time in Spain's democratic history.

Puigdemont's JxCat second-in-command is Jordi Sànchez, leader of the Catalunya National Assembly, who is in prison without bail, as is former regional interior minister and JxCat number seven, Joaquim Forn.

Ex-minister of teaching Clara Ponsatí, JxCat number three; former culture minister Lluís Puig, number two on the JxCat list for the province of Girona; one-time regional ministers of health and agriculture, Antoni Comín and Meritxell Serret – number seven on the list for ERC in Barcelona and head of ERC in Lleida respectively – are in Belgium with Puigdemont.

All five know they will be arrested the moment they set foot on Spanish soil, but can remain free if they stay in Belgium.

ERC leader for Barcelona and former deputy president of Catalunya, Oriol Junqueras, is also in jail.

All the exiled and jailed candidates were still able to stand for vote, having been approved to do so by the provincial electoral boards, since none of them have been sentenced – if they had a custodial sentence not subject to appeal or for which an appeal had failed, they would be unable to run for the elections until their prison term had expired.

As yet, they have not been formally sentenced for rebellion and sedition, only charged and remanded in custody.

To be invested as regional president, the final candidate has to attend the swearing-in ceremony in person and pledge allegiance both to the region of Catalunya and to the Spanish Constitution – yet it is the Constitution, rubber-stamped in December 1978, which bans referenda on secession and which has allowed the State to fire the regional government, meaning it is unlikely any of the pro-independence parties will be willing to do so.

Also, a president will lose a month's income for any period of three consecutive Parliamentary meeting missed, or five alternative sessions, and all absences not accredited – such as through a sick note or proof of clashing public duties – must be published.

It appears unlikely any candidate in prison or in Belgium will be able to carry out a presidential role.

But even if Inés Arrimadas, head of the party with the most seats, is sworn in as regional president, her every move could potentially be voted down and blocked where the independence parties are unanimous.

Decisions and proposals made by the separatist parties could still go through, given that, in total, their votes in favour would make up a clear majority with 70 out of 135.