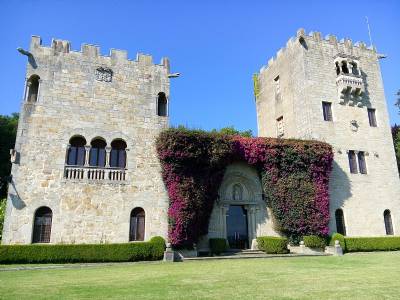 GALICIA'S fight to reclaim the Meirás country estate from the family of dictator General Franco has taken a new twist: for the mansion to be restored to public hands, the State would have to pay its current 'owners' maintenance costs dating back to 1975.

Franco expoliated the estate from the people of the town of Sada (A Coruña province) during his iron-fisted fascist régime, and an ongoing campaign for it to be given back to the region of Galicia has led to a group of young adults who peacefully entered the complex on what was due to be an open day for the public facing huge fines.

The descendants of Franco, who are considered the owners, are suing the campaigners for 'incitement to hatred' after they hung a banner from the roof calling for the estate to be returned to the people.

Activists affected say it is 'tragically ironic' that the relatives of a fascist dictator should be suing them for 'hate crimes'.

After consulting legal experts, Galicia regional government has found that it would be able to start proceedings to reclaim the Meirás estate, but would have to pay the Franco family for all its upkeep costs since 1975.

The estate used to be a summer home for the author Emilia Pardo Bazán until Franco decided to 'buy' it via an enforced form of crowdfunding.

Residents were obliged to pay prohibitive taxes which were used by the then leader to buy the property, back in 1938.

Amidst the tug-of-war for the plush mansion and its grounds, Franco's family has now put the estate on the market for a cool €8 million.

The advertisement with the estate agency Mikeli, based in Cantabria, describes its unique historic features but does not mention the fact it is a registered heritage site.