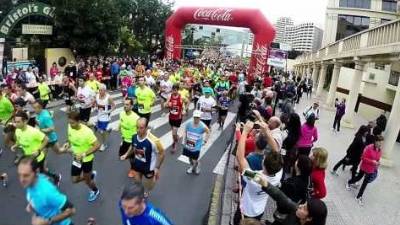 PHYSICAL activity and exercise improves lung capacity and breathing ability even in people who smoke, according to research headed up by Barcelona's Global Health Institute (ISGlobal) and coordinated by Imperial College London.

Part of the Ageing Lungs in European Cohorts (ALEC) project, the study shows that smokers do not have to worry so much about air pollution when exercising, and can still benefit from physical activity in less-than-clean open air.

Regular smokers know only too well how a short run for a bus can leave them breathless, even if they are otherwise physically fit and well-toned, and that their lung capacity and oxygen saturation levels are often well below those of non-smokers of a similar age and in similar health.

But even if they cannot or do not wish to give up, smokers can still improve how well their lungs work and cut down on shortness of breath through exercising, as the study has found this is neither as pointless nor as counterproductive as packet-a-day consumers always believed.

And according to the results of the research, published in the magazine Environment International, this is even the case where mild to moderate air pollution is present.

But non-smokers should avoid exercising in unclean air, as it is less beneficial, the study shows.

Scientists analysed the data of 2,801 people who had never smoked, and 1,719 regular smokers, in Spain, the UK, France, Italy, Belgium, Norway, Switzerland, Germany and Sweden, all aged between 27 and 57, over a period of 10 years.

They took part in the European Community Respiratory Health Survey, and those who claimed to carry out at least light physical activity – defined as two or three times a week as a minimum or an hour or more a week – were evaluated over a decade, including taking breathing tests using an 'aspirometer', a gadget used by pneumologists to test lung capacity.

Researchers found a continuous improvement in lung capacity in smokers who exercised frequently, irrespective of the air conditions in which their activity took place, but in non-smokers, lung capacity only improved when they exercised in clean air or only slightly polluted atmospheres.

Main author of the research report, Elaine Fuertes, states that the results 'reinforce the message that physical activity is beneficial for health, including respiratory health', but that the team's data showed a 'certain reduction in these effects among non-smokers who live in cities and towns with a high level of air pollution'.

“If this is confirmed, policies aimed at controlling and monitoring air-quality levels would guarantee maximum benefits when encouraging exercise,” she writes.

“Many types of physical activity take place in the open air – such as cycling, walking or running – and, additionally, active transport is considered a sound method for reducing air-pollution levels as well as reducing the tendency to a sedentary lifestyle.”