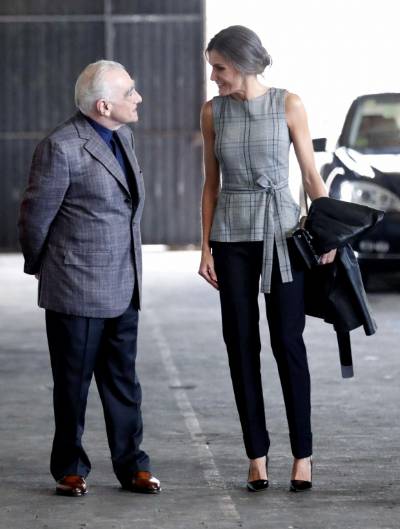 THE 'LETIZIA Effect' has once again seen a high-street store sell out of one of its garments – a grey checquered tunic top with a tie waist, retailing in global fashion store Zara, has flown off the shelves since the Queen was seen wearing it yesterday (Thursday) at the Princess of Asturias Awards ceremony.

Selling at full price for just €26, the top (shown above as King Felipe VI's wife poses with award winner Martin Scorcese) is the latest in a series of budget pieces the Queen has turned into must-have items.

Three years ago – then sporting a trendy Victoria Beckham-style bob to enhance her refreshingly un-Royal look – Queen Letizia was snapped on holiday in Mallorca wearing a €15 T-shirt with white trousers and espadrilles.

The top, designed exclusively by Madrid-based Eduardo Scala for the publishing house Delirio in the Castilla y León city of Salamanca, is black, cap-sleeved and with a white capital-letter design bearing the name 'KAFKA', in tribute to the Czech-born German author of the classic novellas The Trial and Metamorphosis.

Back in 2015, it was also available in white or red, although Delirio – which sold it for just €15 plus postage – said the black version was the one that attracted the most buyers.

And on Thursday, the Queen Consort of Spain did it again: her apparently effortless elegance which makes her a fashion icon as well as a global ambassador, charity promoter and, prior to her marriage, a top-class TV, radio and newspaper reporter, has meant the Zara top vanished within hours of her being photographed in it.

By the close of Friday, every size from M to XL inclusive had disappeared, although anyone keen on copying Royal style who takes an XS or an S is still likely to be in luck, always bearing in mind that Zara's sizes are typically slightly smaller than most other Spanish-designed brands of clothing.

As clear evidence of the Queen's knack of making anything she wears look sophisticated, even traditional fashion 'no-nos', HRH Letizia combined the top with fitted navy-blue trousers and black patent-leather high-heeled court shoes, a colour combination that would not normally be recommended but which is now likely to become at least socially-acceptable, if not downright elegant, as a result.

And the patent-leather shoes were combined with a traditional leather mid-length coat, black with a tie waist – again, two types of material not usually advisable together but which the Queen has now given women worldwide licence to wear with pride.

The entire affair was topped off with a black, rectangular studded-leather handbag, once again shunning Royal tradition of classic tailorings and hats, and with her hair in a loose chignon.

Always the Queen of understatement, HRH Letizia wore no jewellery except for pearl stud earrings – and although she has been seen occasionally in plenty of bling and making it look elegant and tasteful, has proven yet again that she is capable of raising the fashion bar with as little decoration as possible.

On the whole, copying Letizia's style tends to come at a higher cost – her favourite designer, whose pieces she is most often seen wearing, is the top-of-the-range Felipe Varela, although not for ostentatious reasons: purely because she likes his look.

More recently, she has been snapped sporting outfits by Venezuelan designer Carolina Herrera, who is also not exactly a budget creator but whose pieces are not entirely beyond the reach of most civilians' pockets if they save up hard for them, and in fact, whose basic T-shirts with logos come in at under €100.

Queen Letizia has, inevitably, been compared in more recent years with the Duchess of Cambridge, Princess Catherine, formerly known as Kate Middleton – seven years after TVE reporter Letizia Ortiz became the Princess of Asturias and three years before she became Queen Letizia of Spain, Kate's marriage to Prince William of England thrust her and her clothing into the limelight, starting with the beige Shola dress from high-street store Reiss, which was then on sale for 175 pounds (currently €200) that she wore to meet the then First Lady of the USA, Michele Obama, and which later fetched double the price on eBay.

And the Duchess of Cambridge has also been seen in Spain's greatest fashion export, Zara, leading to a run on the items photographed.

Once, also wearing cork-wedge-heeled navy-blue espadrilles by Stuart Weitzman, made in Elda (Alicante province) and a double-breasted navy-blue blazer with multiple brass-coloured buttons costing €60 from Zara, in September 2014, and again, a red Zara coat costing just €50, in May 2016, the mother of the future King George of England sparked queues in the Inditex empire's most famous chain across the globe.