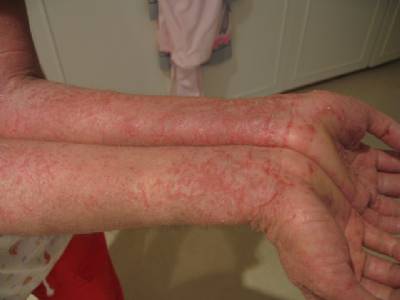 The president of the Spanish Society of Clinical Allergology and Immunology (SEAIC), Dr Joaquín Sastre, revealed on Monday that biological therapy to treat serious cases of acute atopic dermatitis, which have already received EU approval and will be available in Spanish hospitals in two months' time, are going to "radically change the lives of patients".

As Sastre explained, the prevalence of acute atopic dermatitis is "fortunately" very low, affecting only between 0.2% and 0.55 of the population, and yet it "destroys" the lives of those affected because of the intense burning itchiness it causes on the skin. "Patients' quality of life is poor and distressing", said the doctor. What's more, it tends to appear on the face in young people during their twenties, causing pyshological problems that can lead to insomnia, anxiety and depression, as well as a feeling of isolation.

Two epidemiological studies carried out in Spain, however, have shown that these patients don't respond to normal topical treatments and need harsher medication like cortisone or even immunosuppressants. But now authorisation has been granted for the use of dupilumab, a biological treatment which is "radically changing the lives" of those affected.

Dermatologists and allergists have already tried dupilumab with great success on a hundred or so patients and in a month or two it will be available in Spanish hospitals. Further treatments are under investigation but will be a while longer in reaching the market as they are not currently proving to be as effective as the biological therapies.

Atopic dermatitis is on the increase and it is believed that living in an ever more aseptic world, where there are fewer infections to invade our bodies, means that our immune systems redirect their work from attacking now less common bacteria and microbes to producing autoimmune diseases and allergies. Anti-bacterial washing products, especially those used on children, are often blamed for this phenomenon and there is currently no means of preventing atopic dermatitis.