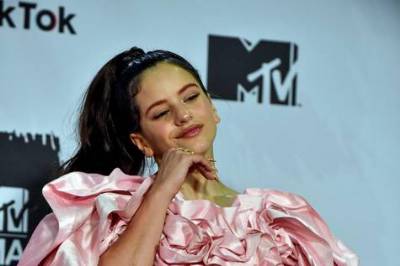 A TOP name in modern flamenco pop has launched her own clothing range at Inditex's budget streetwear brand, Pull & Bear.

Rosalía, who recently performed live in London and at the MTV Awards, has been described as 'the Madonna of Spain' and the 'Beyoncé of flamenco', a musical style she says 'should be more mainstream' and which she combines with rap.

Now, her line of clothing is set to appear in 330 Pull & Bear stores in 33 countries, including Spain, this coming Monday.

Rosalía's working with the brand is part of its 'commitment to support a generational movement' that 'adds value to the new Spanish creative scene', and is not the first time contemporary music and fashion have come together on the high street.

Back in 2010, mid-upper range designer Adolfo Domínguez launched a sub-collection of its younger U range – 'The Music Collection' was inspired on outfits worn by pop and rock stars and was part of a joint effort between the firm and Spain's chart radio station, Los 40 Principales.

And fashion experts advise anyone who wants to make their clothes-buying an investment rather than mere retail therapy should purchase pieces created by existing top designers or by celebrities for low-cost high-street stores, or worn publicly by celebrities.

Rosalía's pieces so far include a dark-coloured denim jacket with a nipped-in waist and a fluorescent-green polo-neck jumper, both cropped, although plenty of other items have been kept top-secret and will be unveiled on Monday in store.

It is believed her collection will be based largely upon her own wardrobe – and Rosalía has been seen in Versace at the Los 40 Music Awards, in María Escoté in the MTV Awards, and in Palomo Spain, also a favourite of Wrecking Ball singer Miley Cyrus, during her promotional concert for the launch of her latest CD, El Mal Querer.

She has also been seen in full skirts and feathers combined with casual, sporty clothes, neutral and psychedelic tones and even gold.

The photograph shows her at this year's MTV Awards in Bilbao.