The Three Kings explained: Why Twelfth Night is bigger than Christmas Day in Spain

The Three Kings explained: Why Twelfth Night is bigger than Christmas Day in Spain 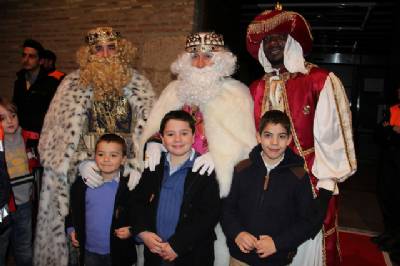 CHRISTMAS isn't over yet in Spain – far from it. Don't forget there are a full 12 days of the festivities, not just December 25 (and Boxing Day isn't even a bank holiday in Spain, so they need to squeeze another one in somewhere).

Anyone who has never been to Spain in early January may only remember the Three Wise Men from the East if they watch a Nativity play, but for Spanish children, it is these heavily-adapted biblical figures who bring them their presents.

Santa Claus was a relatively unknown quantity in Spain until around 10 years ago, and was seen as little more than a commercial mascot for the holidays; nowadays, children receive small gifts from Father Christmas, but the night of January 5 is when they get their new bikes, PlayStations and Ella-from-Frozen outfits.

They may find these waiting at home after they return from the evening parade of the Three Kings, or they may get them directly from Balthazar, Melchior and Casper in their town square as these are unloaded by the Pages in public.

Kings? And three of them?

The original Bible story tells of how a group of sages followed a star to Bethlehem to bring the highly-auspicious gifts of gold, frankincense and myrrh to the Baby Jesus, but the actual number, names and rank were never mentioned.

The Syrian and Armenian Orthodox Churches, from around the third century AD, said there were 12, like the Apostles and the 12 Tribes of Israel,whilst iconography from around that time – when the Baby Jesus would have been over 200 years old – showed anything from two to four.

Finally, by around the end of the third century, it was decided there must have been three – one for each gift.

Known as the Magi in recent centuries – the plural of a man of mystical origins, such as wizards – they were not revealed as kings in the Bible, but over 200 years after Jesus' birth, the general consensus was that they must have been men of great means, given the superior quality of the ominous gifts, consistent with rulers or aristocracy.

Their names were never given in the holy text either: the first time they appeared as Melchior, Casper and Balthazar was in the famous San Apollinaire Nuovo mosaïc in Ravena, Italy, which dates back to the sixth century AD and shows them in Persian costume, representing different ages.

And it would not be for another 900 years that one of the kings, Balthazar, was depicted as black – from the 15th century onwards, Balthazar was considered to represent Africa, Casper Asia and Melchior, the palest of the three, representing Europe, the only three continents known to exist back in the Mediaeval era.

Other countries in Europe, such as The Netherlands, celebrate the festival of Saint Nicholas – famous for having dropped gold coins down chimneys into poor children's socks which were drying out on the hearth overnight – on or around December 5, and Christmas Day is often just a huge family gathering with a big meal.

Parts of Spain opted to emulate this in the 19th century, but on the night before the Epiphany, which they turned into a huge children's fiesta with presents. 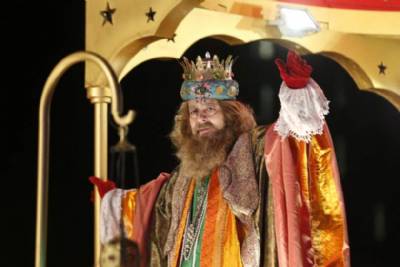 The first-known Three Kings parade took place in January 1866 in Alcoy (Alicante province), and became a tradition gradually extending across the country and, later, to some parts of Latin America, either as an alternative to the typical Christmas festivities or an addition to them.

This means the Three Kings celebrations as Spain knows them are a national invention, and one that actually came after Father Christmas – at least, after Saint Nicholas or 'Santa Claus', and around the same time as he began to be widely depicted as dressed in red with a sleigh pulled by reindeers.

Rather like Christmas Eve night and Christmas Day, getting the full enjoyment potential out of the Three Kings normally means having to be a child, or having a child – adults do swap presents, although this is less de rigueur and a sizeable number do not bother; the festivities are more geared towards kids than grown-ups.

Children sometimes leave their shoes out, often stuffed with straw, for the Kings to fill with gifts – plus a carrot or two for the donkeys, since the Three Kings follow their star to Spain on these trusty beasts of burden rather than on camels, as much of the rest of the world believes – before they set off for the evening processions.

Nearly all towns and villages, however small, hold a Three Kings parade of some description on the night of January 5, traditionally starting around 17.00 or 18.00 – if you're not sure exactly when or where, any local resident will be able to tell you, if you don't hear them first. 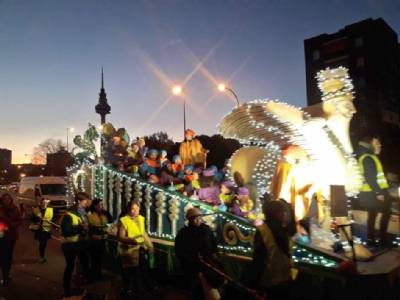 An ornate float carrying the Magi, flanked by Royal Pages or helpers – usually members of local fiesta organisations – hurl sweets into the crowds, and the cavalcade stops at various points in town to read out each child's name as their present is unloaded.

These presents are normally bought by parents, grandparents and other adults in the family, and sent to the organising team in plenty of time to wrap up and store.

A week or so before, the Royal Pages will have paid visits to the town to collect letters from children containing their festive wish lists.

Local fiesta groups have taken over from town councillors in playing the Kings during their Twelfth Night parade, and lots are usually drawn to ensure fair distribuion – but this, of course, means a 50% chance one or all of the names pulled out of the hat will be female.

In small, close-knit villages, this is rarely an issue, since the participants are in costume anyway, but in big towns and cities, it has sparked hot debate.

It is not clear whether the original Bible story even confirmed the star-followers were male rather than female and, as every other aspect including names, numbers, origin and social status have been effectively invented, why not their gender, too?

Traditionalists insist the Magi were men and the parade should be, too, even though the celebrations are more about children having fun than remaining faithful to the original holy text.

And the more forward-thinking say it would be unfair for the parade to become a 'boys' club' and, in the 21st century, absurd and unacceptable to bar candidates purely because they are female.

Campaigners for equality, over the last five or 10 years, have been calling for Balthazar to be played by a 'real' black person, rather than a white European with his (or her) face painted black.

Many Spanish towns have been trying hard to make this a reality, although residents of African descent remain very much in the minority in Spain; unlike the USA, UK and France, which have a sizeable community of black natives whose earliest ancestors there date back to around the 17th century, this is not so much the case with Spain – Spaniards of non-European descent are typically from Latin America or Morocco.

Some towns have opted to 'use' residents of Arab or Andean features to play Balthazar, however, if they have difficulties finding a black man or woman to flesh out the part.

CULT director Pedro Almodóvar and British-Australian actress Tilda Swinton have started filming the former's – a 15-minute short based upon a 1928 novella by author Jean Cocteau. As multiple Goya-winner...