€500 notes to be withdrawn from circulation

€500 notes to be withdrawn from circulation 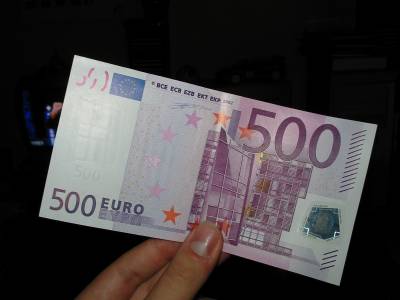 CENTRAL banks in Eurozone countries will start to withdraw €500 notes from circulation from January 27, except in Germany and Austria.

They will remain legal tender, even though the Central European Bank (BCE) stopped minting them from the end of 2018, but if banks on the high street receive any, they are required to send them to the main bank of the country wwhich will return them to base.

Until a few years ago, Spain was the country with the most €500 notes in circulation in the Eurozone, but they have become extremely rare – in fact, they now only represent 2.4% of all the banknotes in use worldwide.

The €500 note was colloquially known as the 'Bin Laden' – meaning everyone knew they existed, but very few had ever seen them – albeit in Spain, sightings until around a decade ago were very frequent indeed.

€100 and €200 notes – green and yellow respectively – were also a regular sight in Spain and often even handed over by bank branches when ordinary residents plundered their savings accounts.

But these have also become rare, partly because it has always been extremely difficult to use them except when buying goods or services of at least their denomination, given that shops and petrol stations often put up signs warning they could not guarantee being able to give change for payments made with them.

Despite the apparently infrequent sighting of €100 notes in Spain, they represent a quarter of all the euro banknotes in circulation – or around 23% - and are the second-most common denomination in existence after the €50 note.

Yet €200 banknotes represent only 1% of all the euro notes in existence, or 4% of the total value of euros in cash.

FOR THE first time in the history of credit and debit cards, plastic has overtaken cash as a method of payment in Spain, according to marketing consultancy Nielsen. At the beginning of this year, the Central European...

Tortilla with or without onion? Celebrity chefs join...

PROBABLY one of Spain's biggest and longest-running culinary debates, the issue of whether , or egg-and-potato omelette, should have onions in it or not has caused yet another storm on Twitter – this time after...

Spain's most expensive house on sale for €32m

IF YOU happen to have a spare €32 million floating around in your wallet, you could become the owner of Spain's most expensive house currently on the market – a 10-bedroom ultra-modern villa on the exclusive in...

Carry your umbrella in your right hand during electric...

AMBULANCE shift-leader Ester Armela, based in Madrid, has revealed why the hand you hold your umbrella in if you are caught out in a storm with forked lightning could save your life. “Carry it in your right hand,”...

THIS year's TripAdvisor Travellers' Choice Awards are in – and Spain features on almost every list. Users of the tourism planning platform vote annually in various categories on cities, attractions, beaches,...

SPANISH celebrity chef José Andrés has travelled to Beirut to hand out food parcels following the devastating explosion which has left at least 150 dead and 5,000 injured. Andrés, originally from Asturias, has lived...