Was 'Game of Thrones' star Sophie Turner in Benidorm?

Was 'Game of Thrones' star Sophie Turner in Benidorm? 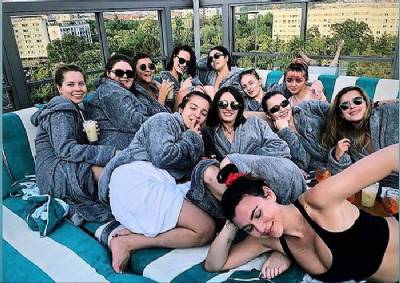 FANS of cult historic fantasy series Game of Thrones have been plunged into confusion with conflicting stories about whether or not Sansa Stark – known in real life as Sophie Turner – spent her hen weekend in Benidorm.

Pictures on Twitter appeared to show Turner and her closest friend Maisie Williams, who plays her sister Arya Stark in the show, boarding a plane and chilling out in a hotel conservatory with a large group of girls of a similar age, in the Alicante province coastal town.

But Benidorm local authorities and tourist board say they had no information about the star-studded guests' having been there, and there is no actual evidence from the actress' or their guests' photographs or comments on social media to confirm the venue.

One picture shows background scenery, with relatively low-rise blocks of flats in sandstone colour and dense trees, including the odd palm, but no landmark stands out to show it is in fact Benidorm.

The story run by several Spanish media claims Sophie Turner took a flight on a private jet from London to Alicante on Sunday (June 9) and checked into a hotel with an infinity pool near Aqualandia water park, overlooking Levante beach.

But no hotel in Benidorm has said the Game of Thrones bachelorette party was staying there.

Tweets and pictures by a Maisie Williams fan in Roşiori de Vede in Romania – who calls herself Maisie Sweet – appear to have started the rumours.

Speculation is now rife that the newlywed and her on-screen sister allowed the public to believe they were in Benidorm as a red herring, in order to put the paparazzi off the scent and enjoy some privacy.

The hen party, unusually, took place after the wedding: Sophie married singer Joe Jonas of the Jonas Brothers – currently at number one in the Spanish charts with Sucker for You – on May 1 in Las Vegas.

She and Maisie were then in London on May 7 for a magazine launch.

But at least one member of the Game of Thrones cast has, indeed, been to Benidorm in the last couple of years, as his photograph of the mountain and skyline proves.