Pensioners at Pride reflect on Spain's huge progress in 40 years

Pensioners at Pride reflect on Spain's huge progress in 40 years 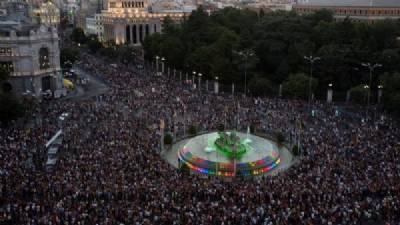 PENSIONERS who headed up the weekend's Gay Pride march in Madrid recall how far Spain has come in protecting their rights – and many say they attended the first-ever Pride festival in the capital 41 years ago when not being heterosexual was frowned upon and even illegal.

They could barely have imagined in 1978, when they had to hide their feelings or face prison, that within just 27 years they would be able to walk down the aisle with the love of their life.

Antonio, 63, says this weekend is only the second time he has marched in a Pride event, the first being in 1978 when he was among 7,000 people brought together by the Castilla Homosexual Liberation Front to protest against the Law of Social Danger, still in force even three years after dictator General Franco's death.

This law, which also made 'blasphemy' a criminal offence, led to hundreds of Spanish lesbians and gay men being jailed for their romantic preferences.

Ramón Linaza, who headed up the pensioners' march on Saturday, was at the first Madrid Pride in 1978 along with modern-day activists including Boti García, Jesús Generelo, Carla Antonelli and the current chairwoman of the State lesbian, gay and bisexual (LGB) federation, FELGTB, Uge Sangil.

Marcher Pilar, 75, said she had only admitted to her friends and family that she was a lesbian six years ago, but that now, 'everyone knows what I think and what I do' and that 'people are now more aware that it's completely normal', but recalls how, at the time of the first Madrid Pride, it was a dangerous situation to be in.

Manuel Martí, 64, carrying a rainbow flag, said: “This reminds me of the first ones of us who fought for our rights here. I demonstrated then, and I'm doing so again now because of the danger we face of going backwards.

“My father was a soldier and our family was very traditional, which meant I had huge problems, but I was determined to fight for visibility: I came out when I was 17.”

Spain has gone from having legislation which could put people in jail for being gay, lesbian or bisexual to being one of the top 10 most accepting countries on earth for all three.

Not only is it by far one of the safest nations on the planet for the LGB community, but is also the one where not being heterosexual is most seen as 'normal'.

The LGB community in Madrid is one of a handful nationwide worried about far-right party Vox gaining a foothold in their regional government or town or city council, fearing that their influence could mean the hard-won rights of non-heterosexuals may take a step back.

But it is likely any attempt by Vox to do so would be met with such resounding public and political outcry that it would never prosper.

Even the staunchly-conservative PP party, in power until last June, has come round to the idea: it was forced to drop an attempt to axe same-sex marriage and adoption in 2012 after its appeal to the Constitutional Court – believing all-male or all-female marriage to contravene the Magna Carta - was rejected, since it turned out the Spanish Constitution did not stipulate marriage to be a union between 'man and woman', and axing the new freedom would also be tantamount to discrimination on the grounds of gender, which is completely outlawed.

The Constitution was signed in December 1978, meaning the first Madrid Pride march pre-dated it by a matter of months.

Now, the PP has at least one national government member who is gay – and, in fact, its president, Mariano Rajoy, attended his wedding.

Spain was one of the earliest countries in the world to legalise same-sex marriage on entirely equal terms as mixed marriages, back in 2005, just days behind Canada and only otherwise beaten by Belgium and The Netherlands.

Adoption was also included in this law change, which effectively pushed the rest of the world into reconsidering its own system of legal protection for same-sex families.

It would take the UK another nine years to follow Spain's brave and welcome example, but now, between a third and a half of the world legally recognises marriage between two men or two women.

What it all means

This year's Pride celebration was a special one worldwide, since it marked the 50th anniversary of the Stonewall riots which gave rise to it – a police siege in 1969 on a bar of the same name in New York which was the local meeting point for gay men and lesbians.

Bar customers stood up to the police, and their actions have gone down in social history.

Pride started as a protest and has now become a street party, like any other fiesta, and local newspapers across Europe print double-page spreads of the celebration, which usually involves live music – Spice Girl Mel C performed in Madrid this year – floats, beer tents, information stands and food fairs.

Rather than 'pride' as in 'being proud of', the concept is based upon 'pride' meaning 'lack of shame' – and although there is little danger of this in the western world and even less so in Spain, work still needs to be done even in Europe, says the FELGBT.

Only very recently, Spain's socialist government overturned a law which prevented lesbians receiving fertility treatment on the national health system, meaning if they wanted to be mothers, they would have to pay.

Surrogacy remains illegal, however, meaning men who want to be dads have a difficult path – they are free to adopt, but having a child of their own is fraught with legal problems.

As Pride is about 'visibility' of minorities, even significant minorities, who once faced misunderstanding and even persecution, it has branched out beyond the LGB community.

Madrid's march, and Barcelona's a week earlier, included 'transsexual pride', and the Spanish Committee for Representatives of Persons with Disabilities and the Federation of Associations of Disabled Persons (CERMI and COCEMFE) made up a sizeable chunk of the weekend's parade.

Also, Black Pride is a huge celebration in parts of the USA – and it is likely many more minority

communities will start to create their own or join in with the LGB version.

Boiler and heater replacement grants in five regions, with...

ONE of Spain's largest consumer organisations has revealed which regional governments offer grants to householders who need to replace their boilers and heaters, and what is involved in claiming the funds. For new...

New work-from-home law comes into force: What it means for...

SPAIN'S long-awaited new legislation covering home-working employees has come into force, and answers some of the questions businesses and their staff had been asking – but remains fairly flexible overall. Key to...