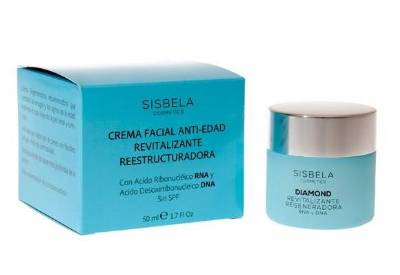 THE FIRM which makes one of the top-rated moisturising creams in Spain – a €5 supermarket own-brand variety – has won a legal battle with an élite cosmetics company over 'plagiarism'.

Mercadona's Sisbela range of day and night face creams, which is exactly the same product as an €85 version retailing under a different name in independent shops, includes a variety called the Diamond Revitalizante ('Diamond Revitalising').

The national patents office refused to allow the cream to be retailed under this name, in case of 'confusion' with the Catalunya-based Natura Bissé's Diamond Extreme.

Natura Bissé, a blue-chip cosmetics firm on a par with many international leaders, described its moisturiser on Twitter: “What makes Diamond Extreme an icon? This revolutionary, intelligent formula gives your skin what it needs, when it needs it, even in extreme conditions. A pioneer in the skincare industry for being the first 360º anti-ageing treatment based on cellular energy.”

Sisbela, by contrast, has not had to advertise since it was found to be identical to the vastly more expensive brand Alain – except the scent – when it caused a similar furore to Lidl's €2.99 Cien Q10 formula, found by a consumer association to be more effective than leading brands retailing at up to €225 a pot.

In both cases, as soon as the reports were released, the respective supermarkets ran out of stock within the day and customers began to queue in the street to get their hands on the last remaining jars.

Star Healthcare, the manufacturer behind Mercadona's highly-rated, low-priced own-brand cosmetics, appealed against the patents office's decision to stop them using the 'Diamond' name.

A judge at the regional High Court of Justice in Madrid has held that there should be no 'confusion' between the Sisbela Diamond and the Natura Bissé Diamond creams.

“From a denomination point of view, we consider that between the two brands, there is no high level of similarity,” the court verdict reads.

“The structure is different, and there is only one word in common, 'Diamond', which is – as the case has proven – a term frequently used in products in the cosmetics industry.”