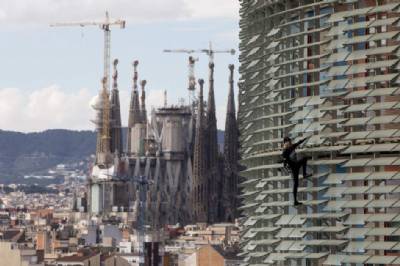 A FRENCH daredevil nicknamed 'Spiderman' has once again climbed Barcelona's Glòries Tower with his bare hands and feet and no equipment whatsoever.

Also known as the Agbar Tower, the 144-metre (472-foot) glass-and-chrome office block is the fourth-tallest building in Spain's second-largest city – the Sagrada Família cathedral is the highest at 172 metres (564 feet), and the two joint second-tallest are the Hotel Arts and the MAPFRE Tower, housing the insurance company of the same name, at 154 metres (505 feet).

Alain Robert has already scrambled up the 38-storey block twice before – in November, and also in 2016 – without any climbing equipment, and is famous for his 'monkey tricks' in his native France, where the Agbar Tower's designer, architect Jean Nouvel, also comes from.

Technically, Alain Robert was committing a public order offence, as he was wilfully putting his own safety at risk and potentially that of others if he fell and landed on someone, although he has scaled so many huge buildings that a fall would be a freak accident rather than an inevitable tragedy.

Despite this, Catalunya's answer to the Guardia Civil, the Mossos d'Esquadra, along with the Guardia Urbana and a fire engine gathered at the bottom to arrest him when he returned to terra firma.

He was arrested, along with another person on the ground filming him and who is believed to have been party to the stunt.

Both men were released after questioning – a situation to which Robert is no stranger.

The above photograph, from social media, shows his first Glòries Tower climb and proves he is not particularly scared of heights.