'Phase 2' agreed for most of Spain: New freedom from Monday

'Phase 2' agreed for most of Spain: New freedom from Monday 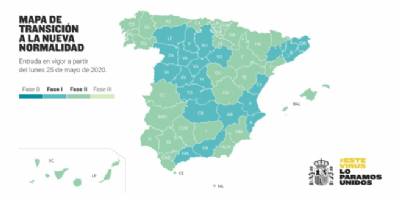 MORE 'unlocking' is on the cards for most of Spain from this coming Monday (May 25), with all of the country set to be on either 'Phase 1' or 'Phase 2'.

Until then, around two-thirds of Castilla y León, all of the Greater Madrid region and the Barcelona metropolitan area will remain on 'Phase 0', whilst everywhere else is on 'Phase 1' with only four small islands – Formentera (Balearics) and La Graciosa, El Hierro and La Gomera (Canaries) on 'Phase 2'.

From Monday, all Spain's offshore territories – the Balearic and Canary Islands and the cities of Ceuta and Melilla on the northern Moroccan coast – will be on 'Phase 2', along with the whole of the region of Asturias, Cantabria, the Basque Country, Navarra, La Rioja, Aragón, Galicia, Murcia and Extremadura.

In Andalucía in the south, the provinces of Málaga and Granada remain on 'Phase 1', but the rest will move forward to 'Phase 2'.

For Castilla-La Mancha, only the provinces of Cuenca and Guadalajara will switch to 'Phase 2', with those of Toledo, Ciudad Real and Albacete remaining on 'Phase 1'.

In Catalunya, the provinces of Barcelona and Girona will be on 'Phase 1', along with all bar the hospital catchment areas of Alt Pirineu and the Arán Valley in the province of Lleida, whilst the rest of this province and that of Tarragona will pass to 'Phase 2'.

All of Castilla y León will be on 'Phase 1' from Monday, meaning around two-thirds of the region will open up a bit more and the rest will remain as they are.

The Greater Madrid region, one of the worst-hit Covid-19 areas, will switch to 'Phase 1'.

As for the Comunidad Valenciana on the east coast – the provinces of Alicante, Valencia and Castellón – the decisions for other parts of the country suggest these are likely to have been given licence to move to 'Phase 2' on Monday, but the regional government decided not to apply for the change.

Valencian health minister Ana Barceló said she wanted all of the region to have been on 'Phase 1' for at least the requisite two weeks before applying to open up further.

A total of 10 of the region's 24 healthcare catchment areas have already been on 'Phase 1' for two weeks, but the remaining 14 only made the change from 'Phase 0' on Monday (May 18).

It means 42% of the region will have been on 'Phase 1' for three weeks before it is given more freedom.

The city of Valencia and its metropolitan area had a moderately-high incidence of Covid-19, but was far less pushed than other large cities and nowhere near as badly-hit as Madrid and Barcelona; other parts of the region had far fewer cases as a percentage of the population, but their health services were not considered to have ample scope to deal with a hypothetical second outbreak.

Some of those healthcare departments which will have to spend another week on 'Phase 1', in the same situation as some of Spain's most severely-affected areas, have barely had 200 cases and fewer than 20 deaths all year across an average of 30 towns and villages, and their district hospitals have had ample bed space available for possible admissions since the very beginning.

This means there could be some backlash among the Valencian public about its regional government's decision not to apply to move to 'Phase 2' – especially as an average of a quarter to a half of all bars, cafés and restaurants had opted not to open until 'Phase 2' and have seen their plans to restart trade put back by another week.

'Phase 1' means these premises can only open their outside terraces, which can only be 50% full, and their inside parts cannot be used – meaning those establishments mainly operating indoors and with very small outside seating areas that, in 'normal' times, would only have room for two or four tables, knew it would cost them more to reopen than they would earn: With only one or two tables in total available to customers, it was not going to be worthwhile.

Once 'Phase 2' is in place, they will be able to let up to 30% of their usual maximum permitted number inside their premises.

But those in the city of Valencia may well consider it worth waiting another week as a precaution and in order to avoid undoing all the hard efforts the general public has made since mid-March.

Although this means bars, cafés and restaurants which have decided to open for 'Phase 1' will still have a week of not being able to serve customers indoors, in reality, their outside terraces have barely had an empty table for the last week or two as applicable, with the public rushing out for a coffee almost en masse to gain a longed-for taste of freedom.

And restaurants have adapted well – in addition to the home-delivered food they have been offering during lockdown, 'Phase 1' has meant they can also serve takeaways which customers can collect in person.

Those who have not found this so profitable are, in many cases, confident that from the start of 'Phase 2', customers who may not otherwise have bothered will come flooding in and filling up waiting lists, purely because they can.

Many businesses are now crossing their fingers that the effect of people's 'not being allowed' to do something will see them consciously going out and doing it as soon as the ban has been lifted, having ceased to take for granted the liberty to go out for a drink, for dinner, or to go shopping that they always had before.

Photograph of new 'phase map' by Spain's ministry of health

IT'S A taste of what could come in the near future and one which is hoped will quickly spread to all 19 of Spain's autonomously-governed territories – but one of these has become the first in the country to...

IT WAS practically inevitable and would not have taken a genius in marketing to come up with the idea, but now it's started, it's bound to continue in every other field: Spain's top football teams have...

No quarantine for foreign arrivals from July 1

CONCERNS about foreign visitors being quarantined for a fortnight upon arrival in Spain voiced in the British press have proven unfounded – when Spanish borders reopen for international tourism, this requirement will...