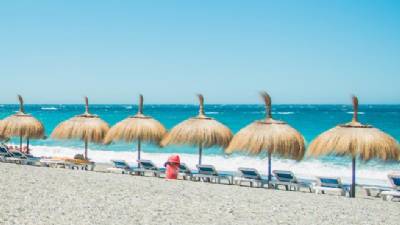 HOLIDAY booking websites have reported their servers almost crashing as the rest of the world flocks online to grab themselves a trip to Spain.

President Pedro Sánchez's announcement that it will now be safe to travel to the country from the beginning of July has led to flood-barriers opening and a surge of reservations at a rate rarely seen before.

“There will be a tourism season this summer,” Sánchez says firmly.

But 'safety conditions' at destination and also in countries of origin have to be guaranteed, he warns.

These will be assured for Spain, although whether or not travel is permitted from certain world regions will depend upon their own Covid-19 situations.

“Spain needs tourism,” Sánchez says – probably unnecessarily, although those living and working in parts of the country which rely heavily upon the holiday industry are relieved to hear that the central government recognises this.

Practically as soon as Sánchez had finished his Parliamentary announcement, holiday booking portals such as Rumbo, Atrápalo, Expedia, Kayak and Booking almost trebled within seconds.

Spain, in a 'normal' year, welcomes around 80 million visitors from abroad – nearly twice as many as the permanent, year-round population – meaning traders and employees in the hotel and catering industries or in sectors linked closely to these were starting to sweat at the thought Spain may be shut for the summer.

Even though the UK is far from out of the water in terms of Covid-19, the British press has already headlined Sánchez's announcement.

The Daily Mail's story title declared: “Back to Benidorm in JULY! Spanish PM tells tourists 'we're waiting for you' as he vows to 'safely' reopen hotspots ahead of more lockdown easing on Monday.”

But both The Sun and the Mail questioned whether current rules about 14 days' quarantine in both the UK and Spain for anyone entering from outside will stop British nationals from travelling.

This said, it is expected that the plans to reopen Spain for international holidaymakers will, by default, come without any quarantine requirements for incomers.

Whilst the Mail headline presupposes that for UK tourists, 'Spain' means 'Benidorm', The Sun shows a photo of a beach that appears to be Peñíscola (Castellón province), a low-density and relatively unspoilt part of the east coast that has yet to be fully discovered by Brits, and the Mirror cover picture is of Tenerife's Playa del Duque in the Costa Adeje area with a second illustration of Sanxenxo (Pontevedra province) beach in Galicia and a third of Magaluf, Mallorca, in the daytime, also showing Norwegian holidaymakers as well as Brits.

In the Mirror, the 14-day quarantine was mentioned, but not as a barrier to travel: The report says an announcement 'has yet to be made' on this, and that it may be 'scrapped altogether' or 'renewed for another two weeks', but that Spain expected to return to a 'new normality' by the end of June.

Our own choice of photograph (above) is of a beach in the southern province of Granada, and was taken by the Costa Tropical Chiringuitos (beach kiosks) Association.

And holidays in Spain are not limited to the areas described above – with more kilometres of coastline and more blue-flag beaches than anywhere else in Europe, and with tourism accommodation in land-locked areas nearly all having access to pools to beat the heat, the choice is endless; check out hundreds of holiday rentals on our site throughout the country.