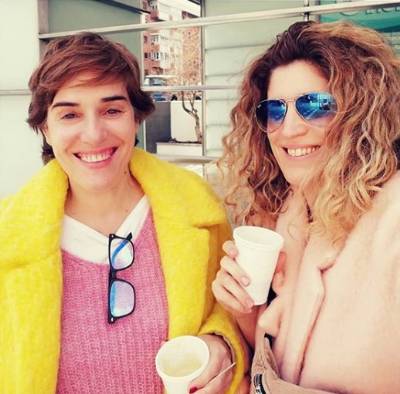 FAMOUS Spanish TV actress and comedienne Anabel Alonso has just become a mum for the first time at age 55.

Until very recently, nobody even knew she had a partner, since Alonso has always been fiercely protective of her private life – but photos a few months ago in the glossies showed her with scriptwriter wife Heidi Steinhardt, and the latter with a very obviously pregnant tummy.

Steinhardt (pictured right), who will be 43 in July, is from Argentina, and her largely behind-the-scenes TV and theatre career takes her between Madrid and Buenos Aires, but she has been in the former city for several weeks now with Anabel ahead of the birth.

Anabel (pictured left), best known for her rôle on the sitcom Siete Vidas ('Seven Lives' – which is how many a cat has in the Spanish language, rather than nine), said she had wanted to be a mum for years, and had been looking into adoption, but that she was concerned she would have to be in a position to put her career completely on hold.

“You have to stop and focus solely on this,” she said.

“And it's three to five long years, so it's very complicated.”

But she finally decided to take the plunge, and Heidi, who is also a first-time mum at 42 and 10 months, has given birth to a healthy little boy they have named Ígor.

Congratulations have been pouring in from all quarters, particularly from Anabel's colleagues on MasterChef Celebrity 3, including Bibiana Fernández and Itziar Castro, sports personalities such as synchronised swimmer Ona Carbonell, and Eurovision contestant – originally for 2020, but now for 2021 – Blas Cantó.

Spain's average age for first-time motherhood is among the highest in Europe – at present, over 70% of women aged 35 do not have children, even if they would like to, and one in five women have their first babies past the age of 40.

Fertility clinics operate in almost every large town, and IVF via egg donation or the woman's own eggs, pre-frozen, can be performed up to and including age 50.

Women older than 50 and even in their 60s have become mums in Spain through this method, but it is extremely difficult to find a doctor or clinic willing to take the risk.