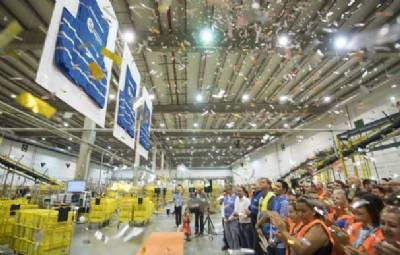 ONLINE retail giant Amazon has once again decided to up its investment in Spain, showing that the pandemic has not put large corporations off expanding in the country.

A second logistics centre in the Greater Madrid region is set to open in Alcalá de Henares, with 500 permanent jobs due to be created within three years.

This will allow Amazon Spain (Amazon.es) to increase its range of products and support small and medium-sized businesses who use the platform to widen their customer base nationwide and internationally, as it will provide more storage and cater for more deliveries.

Amazon has become key in Spain to helping businesses ranging from one-man-bands or family-run local shops through to major chain stores to extend beyond their immediate neighbourhoods, taking orders online from anywhere in the country or beyond its borders.

This even includes retailers of fresh produce in limited parts of the country, such as in Madrid, where same-day delivery of groceries has been set up – a great help to customers pressed for time, or who cannot or do not want to leave the house, especially during the Covid-19 lockdown.

Meeting the demand generated by this increasing supply has meant Amazon Spain now employs a total of around 7,000 people nationwide, in permanent jobs.

It created over 2,000 jobs in 2019 – not just in packaging and transport, but also in professional rôles such as human resources, engineering, operations managers and IT staff.

Amazon.es started up in 2011 – which offers an extra option for expats in Spain, often enabling them to save on delivery costs of orders – and its first logistics centre opened in the Greater Madrid region town of San Fernando de Henares in 2012.

Since then, it has opened others in the Barcelona-province towns of Martorelles, El Prat and Castellbisbal, the Toledo-province town of Illescas, and has just set up another in Dos Hermanas (Sevilla province).

Prime hubs are based across Madrid and Barcelona and two distribution centres operate in Getafe (Madrid region) and Barberá del Vallés (Barcelona province), along with 12 smaller transport stations across the country.

Overall, the multi-national has invested over €2.9 billion in Spain in less than nine years.

It says the Alcalá de Henares plant will not be the end of the story, but intends to keep on expanding in Spain and creating jobs, 'employing thousands of people with talent', and also 'committing to investing in renewable energy' as a 'critical step' towards combating the company's carbon footprint.

At the moment, the bulk of Amazon's premises and jobs are based close to Spain's two largest cities, although it is hoped that ongoing future investment will seek to spread out to the provinces.