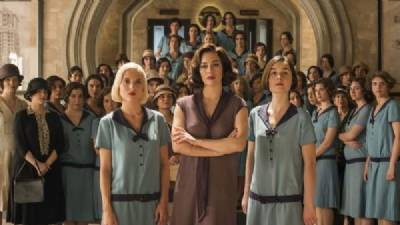 NETFLIX has contacted president Pedro Sánchez with a view to setting up permanent production hub in Spain.

Spanish productions on Netflix which have proven a huge hit, including La Casa de Papel ('The Paper House') and the period drama serial Las Chicas del Cable (in the photograph, by Netflix), which roughly translates as 'Girls on the Line' and focuses on the women who worked in Spain's first-ever telephone operating centres, have shown that the decision to focus on the country as a European production hub is 'a very sound one', according to Sra Ferreras.

“What La Casa de Papel has shown us is that success can come from any place,” she said during her speaking slot at the Commission for Business and Economy Organisation (CEOE) summit, held to discuss ways of helping the country recover following the Covid-19 crisis.

Ferreras is looking at a joint public-sector and private-sector venture in order to dramatically improve the quality – only held back by limited budgets – and visibility of audio-visual production in Spain.

Her idea is that popular TV serials could become synonymous with Spain as a national 'brand', and that the nation would become well known internationally for its small-screen industry.

This year alone, Netflix plans to launch 15 shows made and produced in Spain, of which 10 are serials, and to date, since the platform first landed in the country, has created 13 co-productions and 17 original productions on its soil.

Ferreras says this would also help to 'promote employability' in the audio-visual industry, thrusting 'specific professional profiles' linked to the sector into the spotlight, and develop training programmes on the new technologies used in modern-day productions.

Women's presence is still fairly reduced in the industry, and Ferreras says Netflix plans to increase this dramatically so both sexes are represented equally, enabling their unique ideas and approaches to better cater for society.

Netflix, like every other firm in the TV and film industry, had to down tools as a result of the pandemic, but the teams on the serials El Vecino ('The Neighbour'), filmed in Madrid, and Hache ('H'), shot in Barcelona, have now gone back to work.

But the company may have some work to do in achieving a meeting of minds with Pedro Sánchez – who is, otherwise, sure to accept the move – given his criticisms of the platform a year ago for its having managed to avoid paying huge amounts of tax in the country.

Its corporate tax declaration came to just €3,146, despite its being an international network with a base in Madrid.

Sánchez 'named and shamed' Netflix during a session in Parliament to discuss the so-called 'Google Tax' his deputy president Pablo Iglesias wants to levy on the largest corporations.

He said Netflix 'was not the only one' and that 'legal' tax avoidance by big companies was 'not only untenable', but 'an attack on the most basic principles of responsibility and fiscal justice'.

Pablo Alborán comes out as gay: “I need to feel a little...

POPULAR chart-topper Pablo Alborán has come out as gay after years of public speculation partially fuelled by his hot denial in 2014 of being romantically linked to Puerto Rican star Ricky Martín. Málaga-born Pablo,...