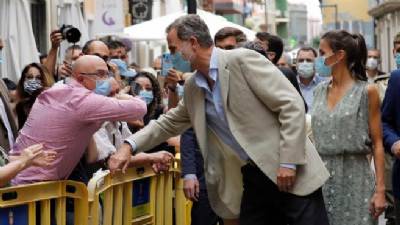 KING Felipe and Queen Letizia arrived in Gran Canaria today (Tuesday) – their first official trip since before lockdown – to 'transmit the message' to people in Spain that they 'can now safely travel anywhere in the country'.

Their visit this morning, however, came before the announcement of a handful of localised outbreaks, mostly in northern Spain – half of which, around 50, are in Aragón's Pyrénéen province of Huesca, where four districts have been put back to 'Phase 2' after just four weeks of 'New Normality', or the 'precautionary' end of confinement.

These outbreaks have been traced to very specific environments – factories, residential homes and, in Huesca, a group of youths holding a bring-your-own-bottle street-drinking party, or botellón, which is illegal in any case.

The national health authority says it has isolated all cases, closed the premises where the outbreaks have occurred where possible, and are tracing contacts, but have ruled out a return to the State of Alarm which came into force on March 16 and ended on Sunday, June 21.

Felipe VI and his wife Letizia, masked and greeting members of the public with 'elbow bumps' to avoid contact and potential contagion, visited the Pérez Galdós Museum in the island's capital, Las Palmas, and gave speeches urging the Canarians and the rest of Spain to get on with their lives and revive the economy which, like most countries, has taken a temporary knock due to the pandemic.

The monarchs landed this morning at Gran Canaria's military base in Gando, meeting with island and regional authorities, but always maintaining a safe distance.

They also met with employees and business owners in the tourism and farming industries, and were met with resounding applause by masked members of the public lining the streets.

The museum they visited, in Las Palmas' central Triana neigbhourhood, reopened to the public that day for the first time since before lockdown, and the monarchs' presence was aimed at showing support for cultural institutions and encourage people to return to them.

Later, they took a walk on the island's popular Las Canteras beach.

They are expected to visit the Canaries' other main island tomorrow (Wednesday), Tenerife, where they will make an official trip to Santa Cruz – the region's second provincial capital – and also travel to the southern part to explore an agricultural plantation before meeting with representatives of the farming industry.