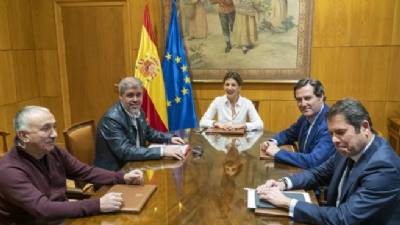 TEMPORARY lay-offs as a result of the Covid-19 pandemic will be extended until September at the request of unions and companies, in order to guarantee everyone keeps their jobs long-term.

Lockdown saw huge swathes of employees 'furloughed' as their firms were forced to shut, and permanent redundancies banned – a tool used to prevent mass unemployment and recession whilst companies were unable to pay wages – but many have been fearing that a 'lean' summer could mean trade is not yet back to normal and usual wage bills on top of low takings could threaten their businesses, meaning major redundancies all round.

Laid-off employees are able to claim dole money, which is 80% of their gross salary for the first six months and 60% of it thereafter, even if they have not accumulated enough to cover them for the furlough period, and these payments will not affect future entitlement.

Although Spain has entered into 'New Normality', meaning 'business as usual' but with social distancing and compulsory masks, the epidemiological situation in other countries could affect trade this summer – where major tourism output countries suffer further outbreaks or fail to control the pandemic, or where workers are suffering financial problems due to shutdown, visitor numbers may fall.

The current 'furlough' arrangement was due to expire on June 30, by which time Spain had anticipated being out of lockdown.

But the main barrier was the Spanish Confederation of Business Organisations (CEOE), which was against prolonging lay-offs.

A major eleventh-hour debate between unions, firms, the CEOE and minister for work Yolanda Díaz (pictured) involved everyone thrashing out their 'conditions' and a compromise having to be reached with just days to spare.

Dole entitlement will not change for 'furloughed' workers, and those who need to reduce their hours if they can demonstrate that they have to do so to care for children, disabled, sick or elderly persons still have the right to do so, although companies are allowed, as was the case before lockdown, to reduce their salaries in proportion to their new working hours.

A ban on redundancies 'for objective reasons' remains – although workers can, in theory, still be fired on 'disciplinary' grounds, where this happens, severance pay is much higher as it is always considered an 'unfair dismissal' in legal terms.

In any case, where an employee is sacked for 'misconduct' or 'incompetence', the onus is on the firm to prove this was the case, not on the employee to prove it was not.

As a result, any redundancies between now and September 30 will be considered 'unfair' or improcedente, and will attract the highest level of severance pay.

In principle, Sra Díaz was not willing to agree to lay-offs of the entire payroll until the end of September, since she considered that the gradual reactivation of Spain's economy would allow companies to start reopening and getting back to normal, meaning they could keep some of their staff on.

She was only prepared to allow 'furloughs' for 'technical or financial reasons', rather than due to force majeur, which would be less beneficial to the companies.

But pressure from the business community and unions has convinced her to agree to 'furloughs' due to force majeur until September 30, although companies' reductions in the Social Security contributions they pay on behalf of their employees will be less.

Firms with fewer than 50 employees will get 70% off their Social Security bill for workers laid off during July; 60% in August, and 35% in September.

Larger companies will be given a 60% reduction in July, 40% in August and 25% in September.

These reductions only apply to 'furloughed' employees, not to those still on the job.

The door has been left open to new lay-offs being made on the grounds of force majeur in the event of a further Covid-19 outbreak – nationally or locally – which forces companies to close, and in this hypothetical situation, employers will get a 80% discount on these workers' Social Security, or 70% in the case of firms with at least 50 staff.

Employees brought back to work will cost less in Social Security – 60% for companies with fewer than 50 staff and 40% for those with more.

Unions and companies have been pushing hard from day one for lay-offs based upon 'extreme circumstances beyond their control' – effectively, the pandemic – to be extended until the end of December, and although they have not achieved their aim, Yolanda Díaz intends to monitor the situation and has not ruled out a further extension after September if the need arises.

THE START of the 2020-2021 academic year will be different from ever before, but some of the consequences of Covid-19 precautions will be positive progress. Class sizes are expected to shrink – a maximum of 15 to 20...

TEMPORARY lay-offs during lockdown can remain in place until June 30, by which time the government expects normality to have returned to the business environment, confirms work minister Yolanda Díaz. At first,...

Some industries go back to work, but lockdown not over yet

SPAIN'S national government has authorised some industries to restart their activity, subject to certain restrictions, but the general public is not otherwise allowed to leave the house for anything other than the...

Ban on redundancies, except temporary ones, during lockdown

COMPANIES are now not allowed to make staff redundant due to 'structural, financial, technical, organisational, production-related reasons or due to ' until after the national quarantine finishes. This will...