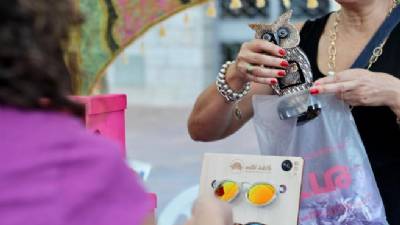 A SURGE in retail sales last month shows that the public had been waiting with bated breath to get back to the shops, and more so than before lockdown, taking advantage of their new-found freedom.

According to the National Institute of Statistics (INE), although April saw almost every shop except those selling everyday essentials shut – meaning the increase in takings of 19.3% in May is probably logical – many were still offering online sales and, until much later in the month, not all of them were able to reopen for trade as before.

Sales have fallen by 20.2% based upon May the previous year, but this is also to be expected, given that full 'business as usual' was not in place until well into June.

Small retailers have been highlighted for their adaptability during the health crisis – offering online and telephone sales, home deliveries, 'pay now buy later' deals, offers, discounts and free gifts, complementary masks and hand-sanitisers – and their takings in May were up 31.4% based upon April where they had more than one branch, or 23.3% where they had only one premises.

The greatest rise in retail sales between April and May was, naturally, non-food products, given that these were largely closed in April, but once shops finally restarted progressively in May, their takings for personal equipment shot up by 125.3% and for home equipment by 89.5%.

Once people in Spain were allowed to travel outside their towns again, this, obviously, increased sales in service stations, which saw a 37.4% rise between April and May.

Reopening is not the only factor, though: Despite late May permitting residents to visit shops again in person, online sales still grew – albeit at 17.6%, this figure was lower than the growth seen for April when it was the only way anyone could buy non-essentials.

Food sales fell year-on-year by 0.3%, and the reasons for this could be many and varied, including not wanting to leave home to go to the supermarket unless it was absolutely necessary, or fears of eating too much in lockdown and putting on weight.

Conversely, many residents have experienced the opposite effect: Despite not being able to leave home, reducing their physical activity, their limited supermarket trips meant they bought and ate less food, and they were unable to go to cafés and restaurants, meaning they actually lost weight in lockdown.

And retailers who work exclusively online saw their takings in May this year go up 64.1% on those of May last year, meaning that even if the confinement was preventing physical shops from opening, consumers still wanted to buy and spend.

Employment in retail, naturally, fell, given that, although many supermarkets and other essential services were taking on more people to cover demand and maintain order among the public, the majority, who were closed, were forced to 'furlough', or temporarily lay off, their staff until after lockdown when they could take them back on again.

And given this, the fact that employment in retail only fell by 3.6% nationally during May, based upon figures from last May, is relatively low.

The INE's figures seem to show that a two-month hiatus has not had a long-term effect on consumer spending and, in fact, may have led to some customers having more money to spend now the country has reopened, given that they only spent their earnings on the bare essentials between mid-March and almost June.

Photograph of a customer in a shop taken by the council in Galapagar, a 'satellite' town in the Madrid region

ONLINE retail giant Amazon has once again decided to up its investment in Spain, showing that the pandemic has not put large corporations off expanding in the country. A second logistics centre in the Greater Madrid...