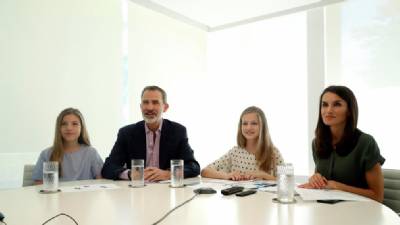 PRINCESS Leonor has stunned the public by giving a speech – without notes or autocues – in fluent catalán, the language of a region she has never lived in or been to school in.

The 14-year-old heiress to the throne joined her parents and sister, the Infanta Sofía, 13, in a video-conference to explain that this year's Princess of Girona Awards ceremony has had to be postponed due to the pandemic.

Although her 'main' title is Princess of Asturias – and Spain's national version of the Nobel Prizes take the same name – Leonor in fact holds a long list of aristocratic titles which are secondary to this, including that of Princess of Girona.

These awards, also named after her, are a smaller version of the Princess of Asturias prizes, and each year follow a different theme.

For 2020, they have focused on the main challenges faced by Spanish society, in particular children, teenagers and young adults, especially in light of the global Coronavirus outbreak.

Princess Leonor and the Infanta Sofía took part in last year's Princess of Girona Awards which, to celebrate their 10th anniversary, were held in Barcelona, the region's capital and Spain's second-largest city.

Although unable to do so in person before a physical audience, because of the Covid-19 crisis, this is the first time Leonor has spoken publicly in catalán.

She assures that, like her sister, she 'knows a lot about' the history and culture of the north-eastern region, because her parents have 'talked to her about it since she was little with real affection' for the area.

Catalunya will 'always hold a very special place in her heart', she said in the video speech.

The online session was given from the Zarzuela Palace in Madrid, where Leonor, Sofía and their parents, King Felipe VI and Queen Letizia, live.

King Felipe opened the conference before handing over to his elder daughter, who thanked everyone, and the Princess of Girona Foundation, for joining her in the seminar.

“It's a shame that this year we've not been able to celebrate the prizegiving and take part in everything that happens around it. I hope we'll see each other soon,” she said, in perfect catalán, which her parents both speak fluently.

Her dad seconded her words after congratulating her with a molt bé ('very good'), and thanked representatives of the Foundation.

He told the winners that he hoped to be able to see them all when the prizegiving is finally able to take place – hopefully in the autumn.

On screen, the award winners and the chairman and director of the Foundation, Francisco Belil and Mònica Margarit respectively, had tuned in all at the same time.

The last time, before the Princess of Girona video-conference, that the family was seen in public was a week ago on Friday at a show at Madrid's Canal Theatre, in support of the reopening of arts and entertainment venues following the end of lockdown.

Later, on Thursday, the King and Queen, who intend to visit each Spanish region in person, went to the Balearic Islands, and from Monday, they will be in Andalucía, visiting Sevilla and Córdoba.

At some point, it is expected they will make their usual summer pilgrimage to the family holiday destination, Marivent, in Mallorca.

Normally, the girls are sent to a summer camp for a month after their school breaks up, and then join their parents until September in Mallorca – typically in the USA, to improve their already advanced level of English.

But it is unlikely they will travel across the pond this year, given that the United States is one of the world's worst-hit countries by the pandemic and, along with Brazil and Russia, its residents are still not allowed to travel to the European Union.

However, further localised outbreaks permitting, it is likely the summer in Mallorca will go ahead as planned – especially given that the King and Queen were in Gran Canaria and Tenerife a week ago to announce Spain was now open to travel.

Photograph by the Royal Household

King and Queen celebrate end of lockdown with official...

KING Felipe and Queen Letizia arrived in Gran Canaria today (Tuesday) – their first official trip since before lockdown – to 'transmit the message' to people in Spain that they 'can now safely travel...

PRINCESS Leonor and her sister, the Infanta Sofía spoke to the health services at the weekend and thanked them for everything they are doing for society – a speech in which Sofía gave a few words of her own in...