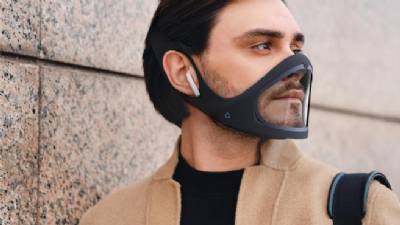 A MASK measuring air quality, the wearer's heartbeat and breathing, self-disinfecting and with a transparent screen so the face can still be seen has been created by a Spanish designer.

The 'Cliu' is safe, reusable and disinfects itself, says its creator, Álvaro González.

Born in Aragón but now living in Italy, Álvaro says: “The idea came up during lockdown. In my studio, we were thinking about how we could contribute to the cause and do our bit in the emergency situation, as product designers, until the day came when a group of friends – experts in technology, marketing and innovation – suggested we create a new-style 'smart mask'.”

Álvaro and the team put their heads down and all hands on deck – working closely together, but entirely online due to everyone in Italy being confined to their homes – and spent the best part of eight weeks focused on their new project before the finished result started to take shape.

“The team was split between Milan and Sicily, so we worked for two months non-stop via 'smart-working' [online meetings, messages and home-working] with the aim of launching a solid crowd-funding campaign on Indiegogo,” Álvaro explains.

“What we wanted, above all, was to solve the different issues that crop up with conventional masks.

“The first and most basic advantage [to the Cliu] is transparency and communication; the second advantage is respect for the environment [being a non-disposable variety] and the third is its built-in technology.”

Álvaro says the Pro version is equipped with Bluetooth, microphone and sensors which, along with the complementary App, allows the wearer to 'prevent health problems' by monitoring breathing condition and frequency, heartbeat, and the quality of the surrounding air.

Also, via the App, the wearer can check the battery level, and the percentage that the filters are working at, as well as real-time information on air pollution on the spot and in neighbouring areas.

It even detects where the nearest Covid-19 cases are.

The Cliu has an in-built UV lamp which allows the mask to be 'recharged' in less than an hour, and which 'kills bacteria in an instant', meaning it automatically disinfects.

“It's designed to absorb air pollution and reduce everyday allergy-causing agents, such as pollen, and its five-layered replaceable filters are equipped with active carbon which filters out particles that would otherwise be inhaled whilst walking around town on any 'normal' day, with or without a pandemic,” reveals the creator.

Even though the mask is totally hermetically-sealed, the front part – which is transparent – can be opened and closed, so you can even wear it in a café and have a drink, popping it back again between sips.

Two versions have been created: The Standard, and the Pro – the latter is the technological version – and its prices range from €99 to €250.

The first versions of the Standard are expected to be on the market by October, and anyone who has contributed to the crowd-funding campaign gets first refusal.

You can even choose from five different colours.

“Around 55% of communication is what you see, not what you say,” Álvaro explains.

“We cannot imagine a world where people who are hard of hearing are unable to lip-read in any everyday situation, whether it's a simple smile or facial expression, and these cannot be detected through a cloth mask. So we've worked on a system that protects, but is transparent, and included an anti-vapour treatment, so it doesn't steam up when you talk. In this way, the Cliu is inclusive; it doesn't put people with a disability at a disadvantage.”

The Cliu is made with recycled, and recyclable, material, says Álvaro.

“At the moment, we're working with the biotechology department at Siena University to be able to add in a type of anti-microbe and bio-active filter,” he reveals.

“Also on the subject of the environment, once we've sold 20,000 masks, we'll have contributed to building a barrier along the river Arno [in Italy] designed to collect up 20 tonnes of plastic waste which would otherwise end up in the sea.”

Plus, as they are not of the disposable type, they will not create masses of waste which would otherwise end up in landfill, since the approved tissue-type masks cannot be recycled – even though they may be possible to recycle as paper or cardboard matter, or as plastic, the fact they may be infected with SARS-CoV-2 particles means they have to be deposited in the 'main' rubbish bins – as is also the case with surgical gloves – since recycling plant workers would otherwise be at risk of contagion.

A SPANISH photographer has managed to capture clear footage of the Neowise comet – against a background of a sky 'peppered' with Starlink satellites. Thursday night was our last chance to see the comet for...

SPAIN could be key in manufacturing a Covid-19 vaccine from the beginning of next year thanks to a ground-breaking agreement with a US laboratory which is near the head of the race to develop an inoculation against the...