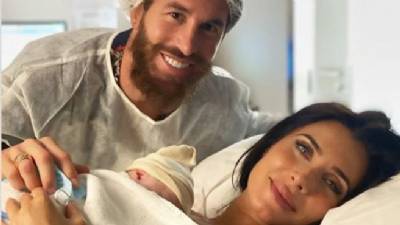 REAL Madrid's Sergio Ramos and his wife Pilar Rubio have welcomed their fourth child together into the world – and named him after two Roman Emperors.

She and Sergio, 34, uploaded a photograph on Twitter and on Instagram and said they were 'immensely happy to be able to introduce Máximo Adriano' to their fans.

“Thanks for always being there. I love you,” Pilar replied to Sergio's tweet, to which he answered, “Always proud of you, love of my life. I love you like crazy!”

Twitter followers swiftly noticed that the Real Madrid defender's fourth child bore the same name as Maximus Decimus Meridius, the main character in the film Gladiator, who was played by Russell Crowe, whilst others commented that the baby's second name was the same as that of the Roman Emperor Hadrian – 'Adriano' in Spanish – who was originally from the town of Itálica in what is now the province of Sevilla.

Itálica is now called Santiponce, and is a huge visitor attraction replete with Roman ruins which tourists and residents alike who have been there say left them wide-eyed and lost for words.

Santiponce, or Itálica, was in fact the first-ever Roman settlement on the Iberian peninsula – mainland Spain and Portugal – and is said to have been founded in the year 206 AD.

Russell Crowe's Gladiator character, who called himself in the film a 'loyal servant' of the Emperor Marcus Aurelius – whose thought-provoking Meditations remain a popular read even today – did, in fact, exist; he was a General to Aurelius born in Hispania and was eventually betrayed by the latter's ruthlessly-ambitious son Commodus, and lived between 144 and 192 AD.

For Pilar and Sergio, who married on June 15 last year after seven years together, Maximus Hadrian, or Máximo Adriano, is not only their fourth child in common, but their fourth son.

Sergio Junior, five; Marco, four and Alejandro, two were all pageboys at their wedding at Sevilla Cathedral, but did not go along to the reception – a star-studded affair replete with footballers and big names from the arts and media worlds – as under-18s were not allowed in.

A WEEK AGO today, Spain celebrated its latest sporting world number one after golfer became only the second of his nationality in history, after the late, great , to soar to the top of the international rankings. Of...

A FRENCH YouTuber climbed up a 32-floor Barcelona hotel with his bare hands in under 20 minutes – earning him applause from the ground and a fine from the regional police. Leo Urban had spent three years practising...

GOLFER Jon Rahm is only the second Spaniard in history to have reached world number one after the late, great Severiano Ballesteros – and he has achieved this at the tender age of 25. In what he described 'one of...