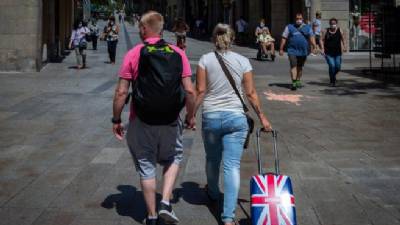 NATIONAL hotel chains in Spain have offered to pay for foreign tourists to be PCR-tested before they return home to avoid their having to quarantine after their trip.

The Spanish Confederation of Hotels and Tourist Apartments (CEHAT), responding to the UK's decision to order two weeks' quarantine for all incomers from Spain – including Brits coming back from their holidays – said its members were willing to pay for every single visitor from abroad to be tested for Covid-19 just prior to their return journey, so they could show proof upon arrival in Britain that they were not infected.

PCR tests detect the virus even before symptoms begin to appear – in fact, around half of the new cases in Spain since lockdown finished are asymptomatic – and some of the reason for the sharp rise in diagnoses is due to faster and more widespread testing and contact-tracing.

CEHAT's chairman Jorge Marichal said: “Covid-19 tests are essential; and not just testing prior to departure, but also in destination.

“We hoteliers are willing to bear the cost of these, and are willing to cooperate to enable reciprocal arrangements so that our customers are not just tested in their countries of origin, but can also be sent back home after being tested at their holiday destination so they can avoid having to quarantine on their return.”

“CEHAT is calling for the European Union to take urgent health measures to guarantee maximum tourist safety both at origin and in destination.”

Hotels' funding of PCR tests for foreign visitors would not be limited to holidaymakers from Britain, but would cover all tourists coming from other countries.

Boris Johnson's government announced at the weekend that anyone travelling to the UK from Spain, of any nationality and including returning holidaymakers who habitually live in Britain, would have to self-isolate for 14 days, which effectively means that British tourists hoping to book a two-week break in Spain would need to take four weeks off work, unless they work from home, and would not be able to see anyone other than fellow household members they had travelled with, or leave the house, for a fortnight after coming back.

CEHAT says this is a bitter blow at a time when Spain's tourism industry was just starting to recover well and the country was already welcoming British holidaymakers, among other nationalities.

“We're working very closely with the government to make British authorities see that the necessary steps need to be taken – but only the strictly necessary steps,” Marichal says.

“The incidence of the SARS-CoV-2 virus in Spanish tourism destinations is very low.”

Outbreaks, although reported in every region, are localised, and the main affected areas are the Catalunya provinces of Barcelona and Lleida, and the Aragón province of Huesca, bordering the Pyrénées.

Typical 'Brit' destinations such as the Costa Blanca, Costa del Sol, Balearic and Canary Islands have seen few, or no, new cases of Covid-19 – in fact, some parts of these areas have only had one or two at the most after more than two virus-free months.

And some parts are still clear of Coronavirus altogether since the end of lockdown.

Outbreaks have been traced to large family gatherings, parties, and nightclubs, and contact-tracing has meant those detected are swiftly isolated.

Many nightspots have opted to close down, restrict their opening hours or apply more stringent entry criteria, and in some parts of the coast, health authorities have ordered them to close temporarily.

Masks are compulsory anywhere outside the home, even where social distancing can be guaranteed, in all regions except Madrid where, if a minimum distance of two metres can be assured, masks are not considered necessary.

Spain's foreign affairs minister Arancha González Laya says she is attempting to negotiate with British authorities, at least to lift quarantine requirements for tourists returning from the Balearic and Canary Islands.

As yet, she has not managed to persuade them.

Spanish president Pedro Sánchez says the UK's 14-day quarantine announcement, and the foreign and Commonwealth office's advice to Brits to avoid travel to Spain, is 'over the top'.

Sánchez says he is 'in contact' with UK authorities to 'attempt to get them to backtrack' on the decision.

“The epidemiological situation in most of Spain is better than in many parts of the UK – for example, the Canaries and Balearics,” Sánchez argues.

“It's a big mistake for the UK to take such a drastic decision when 64% of Covid-19 cases in Spain are concentrated into very specific areas – Catalunya, Navarra and Aragón.

“The UK government should take the real-life situation here into account: The virus is affecting the country in a very unequal way.

Of the 361 registered outbreaks that remain active, Sánchez stresses that 70% of these have only affected 'about 10 or fewer' people, because they are linked to family parties and gatherings where those joining in had let their guard down on the basis that they were all part of the same clan or group of friends.

The rest have cropped up in workplaces – largely among labourers, such as fruit-pickers, and particularly temporary labourers.

Other than Lleida, Barcelona, Huesca and Navarra, Pedro Sánchez points out that the incidence of Covid-19 elsewhere in Spain is 'very low indeed', and in fact, 'lower than the European average' – and much lower than the UK average.

And the Canaries and Balearics, being islands, are in a much better position in terms of keeping possible outbreaks under control, or out altogether.

Also, Andalucía and the Comunidad Valenciana have called for the central government to include them in negotiations with the UK government about opening a possible 'safe corridor' for tourists.

“Andalucía is a safe destination. Our incidence of Covid-19 is much lower than in the UK,” said Juanma Moreno, president of the southern region.

Benidorm's mayor Toni Pérez has urged Sánchez's government 'not to create first-class and second-class destinations', and recalls that the incidence of the virus in the province of Alicante, particularly the Marina Baixa – where Benidorm is based – and even more so in the Marina Alta, immediately north of it, is insignificant, barely into double figures within a 40-kilometre radius.

Spain has other allies in its cause, though: Irish low-cost airline Ryanair says the quarantine rules are 'very disappointing', and says it has no intention of reducing the number of flights it operates to Spain.

TOURISM in southern Europe needs more 'proactivity' to keep up its momentum, but Spain has a 'good structure and base', is the verdict that has come out of the World Tourism Organisation EURAGORA Forum...