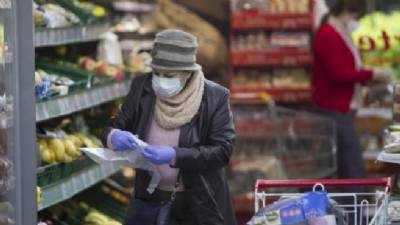 OWN-BRANDED goods in supermarkets have soared in popularity since the Covid-19 pandemic hit Spain, with their purchases accounting for 40% of the total and expected to continue to rise in the next few years.

According to researchers at Adecco recruitment agencies and Bain Company, lockdown and the threat of a second wave of the virus sparked a concerted effort among Spanish households to save money on groceries and non-edible everyday products, partly because of an actual loss in income through temporary business closures and lay-offs, or a fear of this becoming the case.

In many cases, along with a reluctance to leave home unless absolutely unavoidable, this thriftiness has led to residents building up more in savings.

As at 2018, own-branded goods made up 36.2% of the average shopping trolley, and are now up to 40% - an apparently small rise, but in financial terms, a sizeable extra income for their manufacturers.

So-called 'premium', or higher-end branded goods, have suffered as a result, although this does not necessarily impact on manufacturers' profits: Many of the top brand producers also make 'unnamed' cheaper goods and, in some cases, there is very little difference other than name and packaging.

In Spain, there has never been any 'stigma' around stores' own brands; in fact, they tend to have a much larger presence on the shelves and are generally of very high quality, meaning independent brands are typically only chosen for personal preference where a consumer 'gets on better with' a particular type or simply likes the taste of specific foods by Danone, Heinz or Valor, for example.

A shopper in a Spanish supermarket would not normally choose an independent brand over the store's own label based upon a perception of its being of better quality, if they had not had experience of both.

EAE Business School has said Mercadona's own brands – Hacendado for food, Deliplus for cosmetics and toiletries and Bosque Verde for household products – and Lidl's are the two supermarket labels that have most increased in purchase volume this year.

Co-author of the Bain & Company report, Ignacio Otero, says an upward trend in own-branded goods choices was seen during the financial crisis years, from around 2008 onwards.

Over these difficult years, discount shops and cheap, but quality brands were able to expand their market share – between 2008 and 2013 inclusive, these grew by nearly 10 percentage points.

Whether or not old habits are back and set to remain is still open to conjecture, since the pandemic and its full effects are a totally new situation; it could all fizzle out and be a distant memory within a year or so, or may drag on for many years and be the start of more and more viral pandemics; lessons learnt from coping with the Covid-19 spread may mean if the latter happens, the economy may not need to suffer or may move in peaks and troughs, shrinking during times of restrictions on movement or trade and then rocketing when the public is able to 'let its hair down' again.

“We can't yet know for sure whether these behaviours will carry on for any length of time, since there's rather a lot of uncertainty in the medium and longer term,” says Mila Montañana, head of food studies at Adecco.

“What is certain, though, is that we can forecast, at least initially, a more rational approach to consumer spending and a focus on saving – as well as greater emphasis on locally-produced and manufactured goods; a kind of return to the old days of corner-shop and farmers'-market culture.”

The latter trend appeared to be already gaining ground even before the pandemic, as the public is gradually becoming more and more aware of the environmental, social and health impacts of their consumer choices – 'local' means less air pollution through long-distance travel, supporting the national, regional or even neighbourhood economy, and foodstuffs being fresher because they have not spent so long in transit.

In a survey Adecco carried out, answered by 800 people, 53% of respondents admitted they had sought out cheaper supermarket produce during lockdown – although 34% reported no difference and 13% said they had actually spent more.

For those who had reduced their spending, a total of 35% said they had consciously opted more for supermarket own-branded goods, whilst 29% said they saved money by taking advantage of in-store offers and discounts.

Among meat-eaters, 11% said they had swapped more expensive types, like beef, for cheaper ones, such as chicken; and fish, especially fresh fish, tended to be substituted for chicken, frozen fish or dry or tinned food.

Of those whose shopping habits changed during the pandemic, a total of 28% said they had continued in the same way even after Spain lifted the State of Alarm on June 21.

LOANS and other consumer and corporate credit will not become more expensive for at least another year now that the European Central Bank (BCE) has decided to keep the Eurozone interest rate at 0% until June 2021, when...