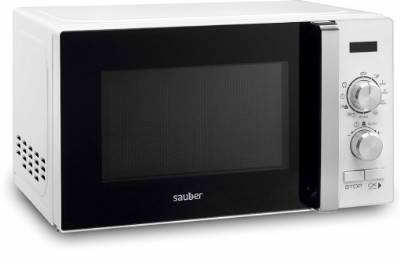 NOT ALL 'life-hacks' you find on social media turn out to be useful, or even harmless – but when they're recommended by one of Spain's largest consumer organisations, you can probably safely give them a go.

The OCU advises householders to clean their microwaves after every single use, both for hygiene reasons, and to prolong the useful life of the appliance.

For most of us, the mere idea fills us with horror: Who's got time to do that? After all, microwaves were invented to make heating and cooking quicker, and to save us precious minutes or hours, not to create jobs that take up most of the time saved.

However, the OCU has listed some tricks that make it a simple 'wiping-up' task which is even easier than using the foamy microwave-and-oven-cleaning spray-on products you find in the supermarket.

One of the most effective and frequently-used is with water and vinegar – the latter being a star product for descaling kettles, cleaning encrusted taps, and removing cat and dog urine by literally 'eating' the bacteria in it.

Fill a microwaveable tupperware container with water and vinegar and place it, uncovered, in the microwave, then heat on the maximum temperature for two minutes.

Remove the tupperware, and the dirt should just wipe off with a cloth or kitchen roll – for any that does not, dip the cloth in the water-vinegar mixture and try wiping it again.

For really tough stains, fill a mug with hot water and add a dash of washing-up liquid – a very small dash, because you don't want to be spending ages rinsing soap-suds out of the microwave to stop all your food tasting of Fairy Liquid afterwards.

The OCU also recommends 'exfoliating' with bicarbonate of soda for the most resistant stains – dip a damp sponge in a saucerful of it, and rub in figure-eight shapes.

Bicarbonate of soda also counters bad smells, so is used in Spanish households in the washing machine, fridge and dishwasher, and can also be used to clean up pet piddle.

Another method the OCU mentions is cutting a lemon into several pieces, dropping it into a microwaveable dish or tupperware full of water, then heat the container, uncovered, for about five minutes.

Like with the vinegar, the steam from the lemon and water softens the dirt stuck to the inside of the microwave and makes it easier to wipe away.

To avoid having to use up masses of kitchen roll, a cheap and effective type of cleaning cloth comes in the form of wet-wipes, baby-wipes or disposable washcloths – once you've used them for their intended purpose, fling them in the washing machine, store them up, and use as kitchen-wipers, floor-wipers, or dusters.

They survive several washes in the machine and several tumble-dryer cycles, but once they start to fray they can be used as cushioning for breakables – like when taking wine bottles in your suitcase on a UK trip – or for stuffing pillows or cushions.

Bar customer pays for 'all the beers he could not order...

A BAR customer in Granollers (Barcelona province) has paid the owners for 'all the beers he could not drink during lockdown'. Based upon the price charged of €2.50 for a (half-pint or 330ml glass), and the...

Spain ditches junk food: Nearly half cut down and switch to...

NEARLY half of Spain's residents have suddenly become more health-conscious in terms of their diets in the past year, according to recent research – although it is too early to say whether two months in lockdown...

MERCADONA supermarkets will extend their opening hours from Monday, and will join other chains selling disposable masks. In the case of the chain founded in the province of Valencia, the masks – by its own-brand...