Philip Stanton mural unveiled as a 'thanks' to Barcelona health service

Philip Stanton mural unveiled as a 'thanks' to Barcelona health service 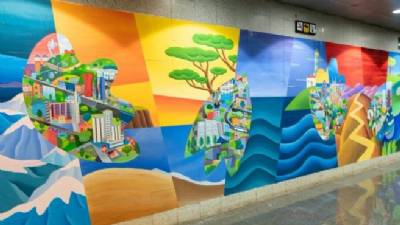 A FAMOUS international artist has decorated a metro station in Barcelona as a 'thank-you' to healthcare staff who battled on the front line during the worst months of the Covid-19 pandemic.

US-born Philip Stanton's brightly-coloured mural has been unveiled at the Guinardó-Hospital de Sant Pau stop on Line 4 and, although it does not feature anything that could specifically link it to medical workers, its location near a major health centre was chosen to lift staff's spirits as they caught the train to and from home every day.

The 60-square-metre wall, most of which is now covered by the mural, features a colourful, cubist take on Mediterranean scenes, and is very much in line with Stanton's trademark style.

Transport bosses say it is also a 'show of appreciation' to the city itself and its inhabitants, and to their 'spirit of resilience' during the 'tough months of lockdown'.

They described it as 'a hymn to hope, positivity and happiness'.

Stanton himself has lived in Barcelona for over 30 years, and got Creative Illustration degree students from Barcelona's University College of Art and Design on board to help him put the mural together.

He did not put a title to the work himself, but sought a name via social media via a competition running between July 20 and 22.

The Barcelona Metropolitan Transport (TMB) board's Facebook and Instagram sites ran the selection, with Stanton on the panel of judges, and out of the 346 ideas, Maribel Sáez Pérez's suggestion – Los Colores del Agradecimiento, or 'The Colours of Gratitude' – was chosen.

Princess of Asturias Award for the Hay Festival and...

A WELSH arts festival that has gone global, and México's largest book fair, have become the third recipients of the 2020 Princess of Asturias Awards – Spain's answer to the Nobel Prizes. Recently, it was...