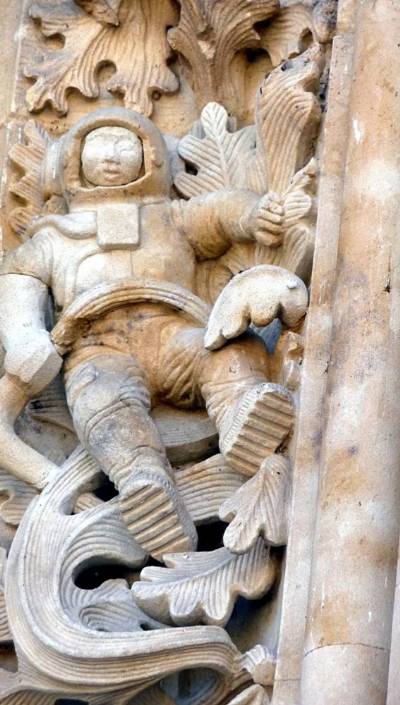 THE CATHEDRAL in Palencia will be 700 years old in 2021 – on June 1, to be precise – and, beautiful though it is, it's often overlooked by the spectacular gothic version in Burgos and the majestic domed-roofed cathedral in Salamanca, work on which started in 1520 and finished in 1733.

And the first and third of these Castilla y León cathedrals have decorative elements which frequently cause tourists to do a double-take.

Palencia's has two aliens on its main entrance, the Puerta del Obispo ('Bishop's Gateway') and Salamanca's has an astronaut on its façade.

Does that mean space travel actually started long before the mid-20th century? Was it, in fact, happening already in the 1730s – or even in the year 1321?

And if you look even closer at Salamanca cathedral, you'll see a faun – a mythical woodland creature – eating an ice-cream.

Hard to believe cones and scoops had been invented by the early 18th century. Or maybe they were?

Speculation has been rife that UFOs had already been sighted from Castilla y León as early as the end of the Mediaeval era, but historians are quick to disappoint us of these theories.

Salamanca's stunning monument to the Catholic faith is known as 'The New Cathedral', because it was completely rebuilt – although given that the rebuild started in 1520, it's not really that new.

Not new enough for a spaceman to appear on the front.

Whilst the cathedral was under restoration in 1992, an exhibition titled Las Edades del Hombre ('The Ages of Man') was under way, showing how humans had lived throughout the centuries and the highlights of each era from the first-known homo sapiens through to the eve of the third Millennium.

As part of the exhibition and during the restoration – led by celebrated heritage architect Jerónimo García de Quiñones – an astronaut (first picture) and a faun with an ice-cream were added by designer Miguel Romero, aimed at creating history in themselves: Just as, every time a building or major monument has been restored throughout hundreds or thousands of years, at least some minor element of the time of the reconstruction has crept in, Romero thought to do the same with Salamanca.

After all, does it matter that a church, palace or castle, say, which was built in, perhaps, the 13th or 14th century, has Renaissance elements because of a restoration in the 16th century, or Baroque features following yet another repair in the 18th century?

Not at all – it adds to the interesting tale it tells and the variety of styles which reflect the society and culture of the time; through it, we can study the Renaissance or the Baroque, the ideas in force during those periods, as well as the Mediaeval gothic architectural trends.

So, why not the late 20th century?

Miguel Romero's idea was that, centuries into the future, historians, art experts and tourists would be able to see first-hand how we lived in the 1990s.

But Romero wanted his addition to remain in keeping with the original style of the façade, so as not to 'deface' it.

He's certainly achieved that; and now you know the tale behind these unusual features, you can enjoy studying the expressions on tourists' faces when they spot it – or even take bets with yourself as to how many people register at all.

Major restorations on Palencia cathedral, including the Puerta del Obispo and the San Isidro Chapel, costing in excess of €2 million, are under way ahead of this iconic monument's seventh centenary – and, once again, conspiracy theories have all been debunked. 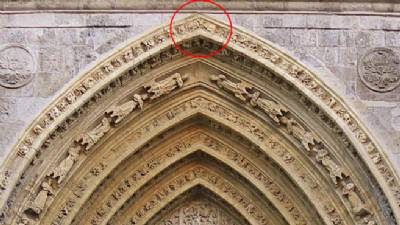 Architect Fernando Díaz Pinés reveals that the two aliens are not part of the original construction, the very first stone of which was laid on June 1, 1321, nor part of the current restoration works – they were sculpted onto the archway in 1995, using artificial stone and then fixed into a 'blank space' on the outer part of the Puerta de los Reyes ('Kings' Gateway').

Díaz Pinés says they are his own work, and he was inspired by Ridley Scott's Alien films.

“You have to look closely, because they're about 20 metres up,” Díaz Pinés reveals.

“From the ground, they look very small.

“In fact, many years went by before anyone even realised they were there.”

His is not the only 'modern' addition to Palencia cathedral: Architect Jerónimo Arroyo, at the beginning of the 20th century, added a gargoyle onto the aspe – the curved 'cul-de-sac' at the end of the aisle inside a church – designed to look like a man with a camera, at a time when photography was just starting to become mainstream.

The gargoyle and camera is a tribute to José Sanabria, whom the city hall describes as 'a popular character who took a great number of photographs of Palencia's artistic heritage'.

These – the aliens and the photographer – are far less likely to be spotted by tourists, but now you know where they are, make sure you set your own camera to zoom in on them if you find yourself in Palencia.