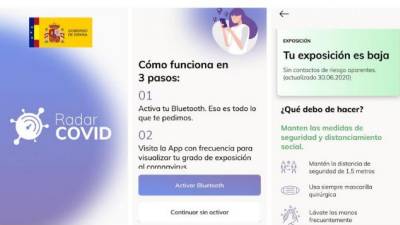 A MOBILE phone contact-tracing application designed by Spain's government is about to become available to the public on a voluntary basis, having passed its first phase of tests.

'Radar COVID' is capable of tracing twice as many contacts as manual tracers – operated by human staff – reaching on average 6.4 close contacts per confirmed Coronavirus case, compared with the present 3.5.

After testing, it was given a score of 8.2 out of 10, and is expected to be released shortly to regional governments and health authorities.

The information does not allow anyone to trace or identify each other through having the App on their phones, but if anyone tests positive for Covid-19, they can then give their consent to the data obtained being used by the health service.

Any mobile phones which have been in close proximity to one used by a person testing positive will flag up an alert of 'possible contagion risk' and include instructions on how to proceed.

The pilot for the App was approved by the Council of Ministers on June 23, then a first phase of tests began on June 29.

Development has continued through various testing phases, and was completed on July 31.

In order to check how effective it is, App developers simulated four fictitious outbreaks of the SARS-CoV-2 virus on the Canarian island of La Gomera and got volunteers to download the test version.

According to the ministry of health, an 'initial functional version' may be ready to go live from mid-August.